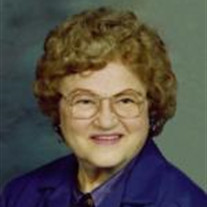 Dr. Agnes Mildred Tabares, 86, of Greenwood, and formerly of New Castle, went home to be with the Lord, Friday, August 6, 2010 at Kindred Hospital in Greenwood. She was born July 11, 1924 in Cardenas, Cuba, a daughter of the late Raúl Pedro Guitart and Maria Josefa Crüell. She came to the United States fleeing Castro’s Regime in 1961. She married the love of her life, Herland José Tabares on August 24, 1951. She began her teaching career at La Progresiva Junior College in Cardenas, Cuba in 1947. She graduated from the University of Havana with a B.A. in 1945 and in 1949 received her first Ph.D. from there as well. She held Ph.D’s in Philosophy and Spanish Literature and also earned a Masters Degree from Ball State University in 1969. Teaching was her passion and after fleeing Cuba in 1961 she began teaching for the New Castle School Corporation in 1963. She taught there for 24 years mostly at Chrysler High School where she was Head of the Foreign Language Department. She touched many lives throughout her career. She belonged to the NEA, ISTA, NCEA, AATSP, ISFLTA, Henry County RTA, Delta Kappa Gamma, ISRTA, and the AMG. Agnes attended Westminster Presbyterian Church in Muncie for over 20 years and enjoyed music, cooking, reading, translating and interpreting. She had a great love of the ocean and enjoyed swimming very much. She received The DAR Americanism Medal in 1988 for her various speeches regarding her love of the United States and exemplifying Patriotism. She is survived by her husband, Herland J. Tabares of Greenwood; her daughter, Maria Tabares of Greenwood; and a niece, Lilliana Mendez-Soto of Sacramento, CA. In addition to her parents, she was preceded in death by two sisters, Dr. Lillian Mendez-Soto and Dr. Eddie Guitart. Funeral services will be held at 11:00 a.m. Wednesday, August 11, 2010 at Sproles Family Funeral Home with the Rev. Dr. Gary R. Cox officiating. Burial will follow in South Mound Cemetery West Lawn Addition. Friends may call from 4-8 p.m. Tuesday at the funeral home. Memorial Contributions may be made to the Alzheimer’s Association at www.alz.org. You may send the family a personal condolence at www.sprolesfamilycares.com Sproles Family Funeral Home is honored to serve the family of Dr. Agnes Tabares.

Dr. Agnes Mildred Tabares, 86, of Greenwood, and formerly of New Castle, went home to be with the Lord, Friday, August 6, 2010 at Kindred Hospital in Greenwood. She was born July 11, 1924 in Cardenas, Cuba, a daughter of the late Raúl Pedro... View Obituary & Service Information

The family of Dr. Agnes Mildred Tabares created this Life Tributes page to make it easy to share your memories.

Dr. Agnes Mildred Tabares, 86, of Greenwood, and formerly of...

Send flowers to the Tabares family.