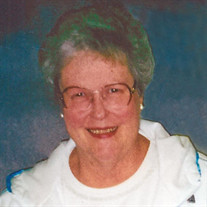 Anita J. Cashdollar, 80, of Indianapolis, passed away peacefully in her home on the evening of Thursday, October 13, 2016. She was born on December 8, 1935 in New Castle, a daughter of Ray C. and Velma M. Williams both of whom preceded her... View Obituary & Service Information

The family of Anita J. Cashdollar created this Life Tributes page to make it easy to share your memories.

Send flowers to the Cashdollar family.