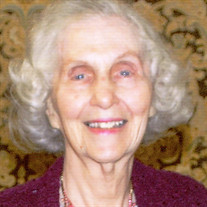 Barbara Ann Dennison, 91, of New Castle, passed away on the morning of Friday, July 6, 2018 at Stonebrooke Rehabilitation Centre. She was born September 30, 1926 in Beech Grove, Indiana, a daughter of the late Ralph and Marie Bailey. Barbara started singing and writing music very early in life and taught herself how to play the piano at the age of 12. She graduated from Beech Grove High School where she was very active in sports, theatre, music, press club and the Girl Reserves. Barbara majored in voice performance receiving her undergraduate from Butler University, Jordan School of Music in Indianapolis. At the start of her professional singing career, she sang with the Summer Opera at the Stars Under the Stars Opera Company, Starlight Musicals of Indianapolis, Indianapolis Symphony Musicals, Dayton Symphony, Cincinnati Symphony Musicals and appeared in various other concerts and musical venues throughout the surrounding states. She later graduated with a Master’s Degree in Voice Performance from Ball State University and obtained 28 credit hours toward her doctorate. She received the Mu Phi Epsilon award, CBS soloist contest winner, Fabien Sevitsky Young Artist’s award and Chicago Music News Syndicate award. Barbara earned her Music Teacher’s Certificate so she could substitute teach throughout the schools in Henry County. She also gave voice lessons privately in her home and taught 13 years at Ball State University. Barbara married the love of her life, Randall G. Dennison on August 20, 1949 and moved to New Castle in the early 50’s. She was very active in the First United Methodist Church conducting choir for over 28 years and singing for concerts. She loved God and desired that much of her music would be about her faith. Barbara was a member of First Nighters, Mu Psi Epsilon, Altrusa Club, National Association of Teachers of Singing, Matinee Musicale of Indianapolis and in the Performing Artists of Henry County. Those left to cherish her memory are her children, Melody Marie Annaed of State of Washington, Katherine Ann Dennison of New Castle, IN, Sylvia Jean Dennison (husband, Robert “Bob” Hogan) of Wisconsin and Margaret E. Dillon of Florida; four grandsons, Michael Hogan, Paul (wife: Mary K.) Hogan, Alex Dennison and Nick Dennison; two great-grandchildren, William Hogan and Margaret Hogan; a sister, Martha J. Bailey; a sister-in-law, Rita Bailey; a daughter-in-law, Cindy Dennison and several nieces and nephews. In addition to her parents, she was preceded in death by her husband, Randall Gene Dennison; two sons, David Randall Dennison and John Floyd Dennison; three brothers, Ralph, John and Paul Bailey and sister-in-law, Rose Bailey. Celebration of her life will be held at 11:00 am, Tuesday, July 10, 2018 at Sproles Family Funeral Home with Pastor Dennis Kinser officiating. A private burial will follow in South Mound Cemetery West Lawn Addition. You may send the family a personal condolence at www.sprolesfamilycares.com The Sproles family and staff are honored to serve the family of Barbara Dennison.

Barbara Ann Dennison, 91, of New Castle, passed away on the morning of Friday, July 6, 2018 at Stonebrooke Rehabilitation Centre. She was born September 30, 1926 in Beech Grove, Indiana, a daughter of the late Ralph and Marie Bailey. Barbara... View Obituary & Service Information

The family of Barbara Ann Dennison created this Life Tributes page to make it easy to share your memories.

Barbara Ann Dennison, 91, of New Castle, passed away on the morning...

Send flowers to the Dennison family.