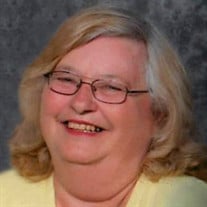 Barbra L. Taylor, 67, of Cambridge City, went home to be with the Lord, Friday evening August 15, 2014 at St. Vincent Hospital in Indianapolis. She was born June 23, 1947 in Berea, Kentucky, a daughter of the late Mason Shelton and Wilma (Pollitt) Turner Nelson, who survives. Barbra worked for many years as a Certified Nursing Assistant (CNA) at several area nursing facilities and hospitals. She had also worked as an Emergency Medical Technician (EMT) for several years. Barbra was a 1966 graduate of New Castle Chrysler High School and had also attended Ball State University for four years. She particularly loved and enjoyed spending time with her family, especially her grandchildren. Barbra loved people. She was all about family and friends and devoted her life to caring for them. She never met a stranger. Barbra would often sit with those who were ill and confined to a hospital or nursing home and with those who had no family to care for them, comforting them until their passing. Barbra always left a place better than she found it. She was also a faithful member of the Temple Baptist Church of New Castle. She is survived by her loving husband, Tommie “Tom” Taylor, whom she married January 19, 1991; her daughters, Carla (husband: Shane) Reum of Muncie and Sonja Joy (husband: Isaac) Cullum of Evans Mills, New York; her step-daughters, Wendy (husband: Jason) Atchison of New Castle and Jessica Reed of Portland; her grandchildren, Sierra Cullum, Isaiah Cullum, Briley Cullum, Nathanel Reum, Emerald Gundy, Emily Gundy, Lance Thompson and Dylan Ried; her mother, Wilma Nelson of New Castle; three sisters; one brother; two special friends, Sandy Chambers of New Castle and Charlotte Johnson of Lewisville and several nieces and nephews. She was preceded in death by her father; her step-father, Travis Turner; a step-son, Thomas Michael Taylor and her sister, Jackie Otto. Funeral services will be held at 11:00 a.m. Wednesday, August 20, 2014 at Sproles Family Funeral Home with Pastor Bob Schon officiating. Burial will follow in Jacksonburg Cemetery in Wayne County. The family will receive friends Wednesday from 9:00 a.m. until time of service. You may send the family a personal condolence at www.sprolesfamilycares.com The Sproles family and staff are honored to serve the family of Barbra Taylor.

Barbra L. Taylor, 67, of Cambridge City, went home to be with the Lord, Friday evening August 15, 2014 at St. Vincent Hospital in Indianapolis. She was born June 23, 1947 in Berea, Kentucky, a daughter of the late Mason Shelton and Wilma... View Obituary & Service Information

The family of Barbra L. Taylor created this Life Tributes page to make it easy to share your memories.

Send flowers to the Taylor family.