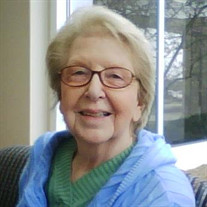 Bea Thurston, 95, of New Castle, went to her Heavenly home on the evening of Tuesday, January 8, 2019 at Henry Community Health. She was born Ona Beatrice Guffey on June 1, 1923, in Wayne County, Kentucky, to the late William W. and Alice (Garner) Guffey, and graduated from Wayne County High School in 1943. She married Kenneth M. Thurston on October 31, 1942, in Jamestown, Kentucky. Bea grew up in Cabell, Kentucky, where her father operated a general store. Her mother Alice was a devout Christian homemaker who was active in the community. After moving to Indiana along with her sister Lena, Bea worked for various drug stores in New Castle before beginning an enjoyable career among friends at Delco-Remy in Anderson in 1953. Bea worked alongside Lena and retired early in 1985 to care for Alice. After retiring she continued working as a substitute teacher for New Castle schools and as an aide on the special needs school bus. Bea was devoted to her late son Jack Thurston, and equally as much to her surviving grandson, James Thurston of New Castle; she loved them both dearly. She was a member of the Eastern Star, a hard worker with a taste for adventure who loved to travel, and was always exceptionally active. Bea began water-skiing in her 40s, rode her bicycle into her 80s, and drove her car into her 90s. After Kenneth passed away in 1993, Bea continued to enjoy the company of neighbors, poodles, friends, and family, living independently the rest of her life. Genuine, honest, and reliable, she gave solid advice and was an example of a life well-lived. Besides her grandson, Bea is survived by her great nieces and nephews, Sondra Cline, Penny Gauker, Mike Stephens, Vickie McGinnis, Beverly Schetgen, and Pat Stephens. Bea was preceded in death by her parents, husband, siblings, and only child. She especially mourned the loss of her baby sister, Lena and her mother, Alice. Funeral services will be held at 1:00 pm on Monday, January 14, 2019 at Grace Baptist Church with Pastor Denny Neal officiating. Friends may call from 11:00 a.m. on Monday until the time of service at the church. A private burial will be held at a later date in South Mound Cemetery. You may send the family a personal condolence at www.sprolesfamilycares.com. The Sproles family and staff are honored to serve the family of Bea Thurston.

Bea Thurston, 95, of New Castle, went to her Heavenly home on the evening of Tuesday, January 8, 2019 at Henry Community Health. She was born Ona Beatrice Guffey on June 1, 1923, in Wayne County, Kentucky, to the late William W. and Alice (Garner)... View Obituary & Service Information

The family of Bea Thurston created this Life Tributes page to make it easy to share your memories.

Bea Thurston, 95, of New Castle, went to her Heavenly home on...

Send flowers to the Thurston family.