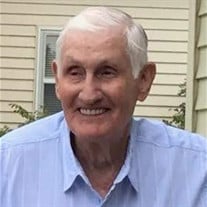 We are confident, I say, and willing rather to be absent from the body, and to be present with the Lord. On April 29, 2022, Bob D. Raines, age 87, of New Castle went home to be with the Lord. He was born on September 29, 1934 in Harmon Hollow, Kentucky, the oldest son of Hubert and Abbie (Harmon) Raines. He was a hard worker and self-taught electrician, carpenter and plumber. In his younger years, he worked as a weekend Police Officer for the New Castle Police Department as a security officer at the Old Chicken Shack Restaurant in New Castle and a former employee at the State Hospital. He worked 12 years at Anaconda Wire and Cable in Anderson as well as Brooks Foods and Nuturn. Dad built numerous grain bins around Henry, Wayne and Rush counties with his three sons. He retired from Alleghany Ludlum Steel in 2011 after 30 plus years of service. Dad loved to cook, coming up with his own recipes for many dishes to share at family get-togethers, feeding the workers at hospice and time together with his Alleghany buddies. He enjoyed traveling with his late wife, Carol, throughout the southern states especially the Natchez Trace. Dad also enjoyed raising his own garden to help feed his family and friends. Those left to cherish his memory include a daughter, Bobi (Mike) Ragan of New Castle; three sons, Mike (Krista) Raines of Bloomington, Scott (Marla) Raines of New Castle and Kent (Kelly) Raines of Solsberry; nine grandchildren, Mika (Brian) Lucas, Matt Raines, Andrea (Jordan) Clark all of Bloomington area, Kaylea (Jamin) Raines of Mechanicsburg (caregiver), Jacob Raines of Richmond, VA, Caleb Raines of Murfeesboro, TN, Michael (Kim) Ragan II of New Castle, Nikki Hines of Whitestown and Morgan (Courtney) Ragan of Greenwood; a brother, Otto (Judy) Raines of Carlisle; three sisters-in-law, Elaine Raines of Bloomington, Bonnie Manis of Cincinnati, OH and Marie Penics of Owingsville, KY; many great-grandchildren, several nieces, nephews and cousins; special friends and care givers, Sue Fisher and Nancy McCullers He was preceded in death by his wife, Carol (Atchinson) Raines in 2016; parents, Hubert Raines in 1968 and Abbie Raines on April 18, 2022; a sister, Norma Jean Jolley in 1995 and a brother, Roscoe Raines in 2018. A very special Thank You to his friends at Henry County Hospice, Beth, Awesome, Mark, Crystal, Monica, Stephanee, Tina and Mary. In lieu of flowers, memorial contributions may be made to the Henry Community Health Hospice and Home Care with envelopes available at the funeral home. Funeral services will be held at 2:00 pm, Wednesday, May 4, 2022 at Sproles Family Funeral Home in New Castle with Pastor Chris Gammelo officiating. Burial will follow at South Mound Cemetery. Friends may call from 12 – 2 pm prior to the service at the funeral home. You may send the family a personal condolence at www.sprolesfamilycares.com. The Sproles family and staff are honored to serve the family of Bob Raines.

We are confident, I say, and willing rather to be absent from the body, and to be present with the Lord. On April 29, 2022, Bob D. Raines, age 87, of New Castle went home to be with the Lord. He was born on September 29, 1934 in Harmon Hollow,... View Obituary & Service Information

The family of Bob D. Raines created this Life Tributes page to make it easy to share your memories.

We are confident, I say, and willing rather to be absent from...

Send flowers to the Raines family.