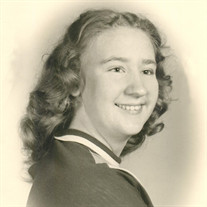 Bonnie I. Warinner, 78, of New Castle, went home to be with the Lord, on the morning of Tuesday, May 12, 2015 at the Addison Place in New Castle. She was born March 7, 1937 in Cumberland City, Kentucky, a daughter of the late Roy Hearldon Bell and Addie (Catron) Bell. Bonnie came to Indiana with her parents at the age of two years old and attended school in New Castle and was a graduate of the American School. For over 60 years she was a member of Central Wesleyan Church in New Castle where she was a member of the church board, Sunday School teacher, treasurer, secretary and also had played the accordion, piano and organ. She loved her church and was a very important part of it. Bonnie had worked for G.C. Murphy as a clerk, RCA in Indianapolis and for over 30 years was a well-known cake baker making cakes for her friends and family. She enjoyed mowing her yard, growing roses, baking cakes and playing her saxophone. One of her favorites past times was sitting with her husband, Don, at their “pondering place” at McDonald’s enjoying chocolate shakes. She is survived by a son, Gary (wife: Diane) Warinner of Boyers, Pennsylvania and a daughter, Krista (husband: Steve) Mains of Middletown; five grandchildren, Kirk (wife: Heather) Warinner, Ryan (wife: Beth) Warinner and Eric Warinner (fiancé: Kelly) all of Powhatan, Virginia, Troy Warinner of Boyers, Pennsylvania and Caleb Kinser of Pendleton; seven great-grandchildren, Regan, Zachary, Leeland, Rylie and Caden Warinner, Luke and Kenevia Kinser; her sisters, Emaline Pryor Raney of New Castle and Marceline Pierce of Elkhart; her sisters-in-law, Mary Bell of New Castle, Minnie Warinner and Louise Warinner both of Albany, Kentucky and Jean Warinner of Somerset, Kentucky. In addition to her parents, she was preceded in death by her husband of 55 years, Donald Warinner; her brothers, Isaac, Raymond and Walter Bell and several brothers-in-law and sisters-in-law. Funeral service will be held at 11:00 a.m. Saturday, May 16, 2015 at Sproles Family Funeral Home with Rev. Gary Warinner and Rev. Glen Raney officiating. Burial will follow in Green Hills Memory Gardens. The family will receive friends from 6 – 8 p.m. Friday at the funeral home. You may send the family a personal condolence at www.sprolesfamilycares.com. The Sproles family and staff are honored to serve the family of Bonnie Warinner.

Bonnie I. Warinner, 78, of New Castle, went home to be with the Lord, on the morning of Tuesday, May 12, 2015 at the Addison Place in New Castle. She was born March 7, 1937 in Cumberland City, Kentucky, a daughter of the late Roy Hearldon Bell... View Obituary & Service Information

The family of Bonnie I. Warinner created this Life Tributes page to make it easy to share your memories.

Send flowers to the Warinner family.