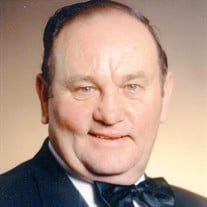 Boyd Allen Beatty, 91, of New Castle, formerly of Muncie passed away on the morning of Tuesday, November 10, 2020 at Heritage House of New Castle. He was born on March 22, 1929 in Boatland, TN, near Jamestown, a son of the late Tollie and Ina (Wright) Beatty. Boyd was a Golden Eagle in the Boy Scouts and attended York High School. He was a member of the Delaware Masonic Lodge #46, Eagles #231, American Legion Post #19 and Teamsters Local 135. He proudly served his country as a Corporal in the United States Army during the Korean War and was honorably discharged in 1952. He was able to make a trip with the Indy Honor Flight on September 2, 2016. For several years, Boyd owned and operated Boyds Jack Shop in Muncie. He drove ready mix concrete trucks in Florida, California and Indiana before retiring from Park Concrete in 1984. Boyd was a fixer upper and could repair about anything. He loved spending time with his daughters and family and enjoyed eating at Texas Roadhouse. Those left to cherish his memory include his children, Debbie (Gary) Smith and Sharon Kay (Richard) Adams; grandchildren, Angela Showalter, Brooke Showalter, Abby (Nick) Albrecht, Andy (Casey) Adams, Amanda (Agustine) Cuautle, Nikita Beatty and Gabe Beatty; great-grandchildren, Ryan Cowan, Maddy Adams, Miguel Cuautle, Carlos Cuautle, Jose Cuautle, Isabel Cuautle and Akiko Beatty; a sister, Ella (Pete) Taylor; step-grandchildren, Chad (Karley) Adams, Misti (Bill) Metcalfe, Corey Smith (Courtney), Carisa (Dave) Whitfield, several great step-grandchildren and many nieces, nephews and cousins. In addition to his parents, he was preceded in death by a daughter, Beth Beatty; companion, Estell Hirst; brothers, Quinten, Charles, Dale, Roger and Warren; sisters, Evelyn Beatty, Martha, Manis, Alyne Huff and Lois Nicholson; mother of his children, Joyce Marlow Giddings. Visitation will be held from 10 – 11 am with funeral service at 11:00 am on Friday, November 13, 2020 at Sproles Family Funeral Home with Pastor Jim Becker officiating. Everyone is welcome for lunch at 12:00 noon at the funeral home followed by procession to Gardens of Memory in Muncie for burial. Military honors will be conducted by contingents from the US Army and American Legion. You may send a personal condolence at www.sprolesfamilycares.com. The Sproles Family and staff are honored to serve the family of Boyd Beatty.

Boyd Allen Beatty, 91, of New Castle, formerly of Muncie passed away on the morning of Tuesday, November 10, 2020 at Heritage House of New Castle. He was born on March 22, 1929 in Boatland, TN, near Jamestown, a son of the late Tollie and Ina... View Obituary & Service Information

The family of Boyd Allen Beatty created this Life Tributes page to make it easy to share your memories.

Send flowers to the Beatty family.