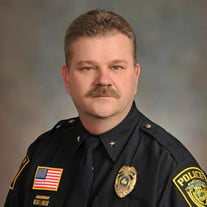 New Castle Chief of Police, Bradley M. Catron, 52, of New Castle, passed away unexpectedly on the evening of Monday, December 18, 2017, at Henry Community Health following a brief illness. He was born on September 25, 1965, in New Castle, Indiana, a son of Olin L. and Rose (Reno) Catron. Brad was a 1984 graduate of New Castle Chrysler High School. He married the love of his life, Cindy Clark, on August 24, 1989. Brad began his career in law enforcement for the City of New Castle on May 24, 1989. He was a graduate of the 90-100 Class of the Indiana Law Enforcement Academy. Brad held the ranks of Patrolman, Investigator, Lieutenant of the Detective Division, Captain of the Detective Division, Assistant Chief of Police - 2004 to 2008, Captain of the Road Division and was appointed Chief of Police in January 2012. He was a 28-year member of the Fraternal Order of Police. Brad took pride in being the leader of his department and had a passion to serve his community. He was the definition of “Serve and Protect.” For 15 years Brad worked for the New Castle Community School Corporation as an SRO - School Resource Officer. He also served on the School Safety Board. Brad greatly enjoyed guarding the tunnel at the New Castle Fieldhouse and had never missed a game until last Saturday. Brad was a great role model and leader both in the community and in his family. He loved helping people and especially enjoyed working with kids. He coached Little League Baseball - and took his team to the state tournament, New Castle JV Baseball, and Optimist Basketball. He served on the board of the Little League and the Christian Love Help Center. Brad attended Open Arms Church. Brad had a very dry sense of humor and loved playing practical jokes. He enjoyed golfing, vacations with his family and four wheeling in Kentucky. Brad loved watching his son, Tyson, race go-karts and was very proud of his daughter, Whitney, Cheerleading for New Castle. Those left to cherish Brad’s memory include his wife of 28 years, Cindy Catron; a son, Tyson Catron and a daughter, Whitney Catron all of New Castle; his mother, Rose Catron of New Castle; a brother, Brian (wife: Brenda) Catron of New Port Richey, FL; his mother-in-law, Jean Clark of New Castle; a sister-in-law, Teresa (husband: Mike) Kreps of Albany; a brother-in-law, Rev. Mike (wife: Angela) Clark of Anderson; an aunt and uncle, Melvin and Phyllis Austin of New Castle; three cousins, Jennifer Austin, Tina Austin and Nancy Erhart; and nieces and nephews, Ryan (wife: Danielle) Lam, Austin Kreps, Shaelie Clark, Chandler Clark, Ashley Catron, Aaron Catron and Michelle (husband: Kevin) Bailey; a great-niece, Lily Lam and great-nephews, Ethan and Dylan Bailey. He was preceded in death by his father, Olin L. Catron and his father-in-law, Walter Clark. Funeral services will be held at 11:00 a.m. Saturday, December 23, 2017, at First Baptist Church in New Castle with Pastors Paul Davis, Rick Davis and Mike Clark officiating. Burial will follow in South Mound Cemetery West Lawn Addition. The family will receive friends from 2 - 8 pm on Friday at First Baptist Church. Arrangements have been entrusted to the care of Sproles Family Funeral Home. Memorial Contributions may be offered to the Christian Love Help Center. You may send the family a personal condolence at www.sprolesfamilycares.com. The Sproles family and staff are honored to serve the family of Chief Bradley M. Catron.

The family of Chief Bradley M. Catron created this Life Tributes page to make it easy to share your memories.

Send flowers to the Catron family.