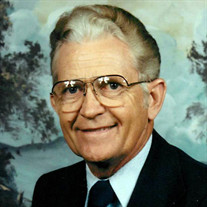 Carl Eugene “Gene” Selman, 89, of New Castle, went home to be with the Lord on Tuesday, February 24, 2015 at Heritage House of New Castle. He was born August 31, 1925 in Morrill, Kansas, a son of the late James N. and Alice (Lewman) Selman. Gene was a 1943 graduate of Spiceland High School. He married the love of his life, Sarah Ann Black, on January 11, 1944 and that same month entered the U.S. Navy where he served as a Radioman Third Class stationed in Honolulu, HI. Gene graduated from Commercial Trades Institute in Chicago in 1948. He worked for the New Castle City Schools from 1950 -1955 and then worked for Westinghouse in Muncie until his retirement in 1986. He was a member of the New Castle Pilgrim Holiness Church since childhood and had served as a board member and Sunday School Teacher. As a hobby, Gene enjoyed auto body work and traveling. He and Sarah especially enjoyed many winters together in Florida. Gene was a devoted Christian, faithful church member, and a loving and caring husband. He is survived by a son, Melvin Eugene “Buddy” Selman of Austin, TX; a granddaughter, Jeana Lynn Selman of Silsbee, TX; a grandson, James Joseph Guffey of Monticello, KY; two great-grandsons, David Lee Bennett Jr. (wife: Tiffany) of Lumberton, TX and Michael Anthony Uzzell of Vidor, TX; two great-great-grandchildren, Amaya Elise Bennett and Aiden James Bennett; a brother, Melvin “Mickey” (wife: Meritha) Selman of New Castle and a niece, Linda Sue (husband: Doug) Head of Ft. Wayne. Gene was preceded in death by his wife of 58 years, Sarah Selman and a daughter, Carolyn Ruth Moran. Funeral services will be held at 12:00 p.m. Friday, February 27, 2015 at Sproles Family Funeral Home with Rev. Thomas L. Sproles officiating. Burial will follow in South Mound Cemetery. Military honors will be provided by contingents from the U.S. Navy and the American Legion and V.F.W. Friends may call from 10:00 a.m. until the time of the service Friday at the funeral home. You may send the family a personal condolence at www.sprolesfamilycares.com. The Sproles family and staff are honored to care for their friend, Carl Eugene “Gene” Selman.

The family of Carl "Gene" Eugene Selman created this Life Tributes page to make it easy to share your memories.

Send flowers to the Selman family.