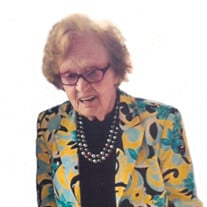 Carolyn Lucille Brown, 91, of Middletown, a vivacious reader, snappy dresser, and independent woman, passed away on the morning of Sunday, November 10, 2019 at Glen Oaks Health Campus. Carolyn’s growing up years began on April 16, 1928 in the mountains of Sevier County, Tennessee with her parents, Lawrence and Etta Proffitt. As the sister of Eugene, Juanita, Betty, Bill, Johnny and Mickey, Carolyn was her family’s chief executive of keeping the younger kids out of mischief, which her brothers tested every opportunity. The Smoky Mountains were both a challenging and wonderful place for Carolyn and her family. Although Carolyn experienced life during the Great Depression, she had wonderful memories. With Carolyn’s intelligence and desire to help others, it was a natural fit for her to choose a career in nursing. In the 1950s, Carolyn moved to North Carolina where she worked as a nurse and lived with her favorite aunt, Mae. During this time, she met her husband, James Brown, at a wedding of mutual friends, and the two were married June 7, 1952. As a navy wife, Carolyn called many places, “home.” While her husband served in the United States Navy, Carolyn took a train on her own and moved to Rhode Island. She also worked as a nurse in Boston, Massachusetts; Bluffton, Indiana; Jacksonville, Florida; Pensacola, Florida; Washington D.C.; Norfolk, Virginia; and eventually settled with her husband in Middletown, Indiana. Her favorite nursing job was caring for children diagnosed with polio. Carolyn enjoyed being a mom to Pamela (Dan) Tower of New Castle, Indiana. She was later affectionately called, Nannie, by grandchildren, Darcy Tower of Carmel, Indiana, and Drew (Abby) Tower of Brownsburg, Indiana. Carolyn was especially excited to become a great Nannie to Henry Tower. Carolyn was a first class Nannie. Always available to give kindness, hugs, and the occasional kick in the pants. She spent many weekends with her grandchildren shopping for the noisiest toys, watching Golden Girls, and indulging in many trips to McDonalds. She is also survived by three siblings, Bill (Melanie) Proffitt of Gatlinburg, TN, Johnny (Clare) Proffitt of Wesson, MS, Mickey (Marge) Proffitt of Seattle, WA and several nieces and nephews. Later in life, Carolyn also enjoyed tending to her strawberry patch, gardening, traveling with her basset hound, shopping for a great bargain, attending services at Middletown United Methodist Church and visiting with family. In addition to her husband and parents, she was preceded in death by three siblings, Betty McCarter, Juanita Roberts and Eugene Proffitt. Funeral services will be held at 1:00 pm, Thursday, November 14, 2019 at Sproles Family Funeral Home with Pastor Dennis Kinser officiating. Burial will follow at Green Hills Memory Gardens. Friends may call from 11 - 1 pm prior to the service at the funeral home. You may send the family a personal condolence at www.sprolesfamilycares.com. The Sproles family and staff are honored to serve the family of Carolyn Brown.

The family of Carolyn Lucille Brown created this Life Tributes page to make it easy to share your memories.

Send flowers to the Brown family.