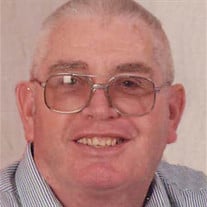 Charles O. Harsh, 76, of Middletown, passed Friday afternoon, September 30, 2016 at Henry County Hospital after battling complications from Multiple Sclerosis. He was born on November 4, 1939 in Richmond, the eldest son of the late Daniel and Nancy (Wilkinson) Harsh. Charles graduated from Spiceland High School, class of 1957 and married the love of his life Lana K. (Lipp) on September 17, 1963 in Shirley, IN. After serving his country in the Air Force during the Vietnam War, he went on to retire from Chrysler in New Castle as a team leader, after 26 years. He served his community as a Straughn Volunteer Fire Fighter, member of Henry County React and Crime watch, and participated in tennis and bowling leagues, was a gardener, avid fisherman and hunter, Taxidermist, small engine mechanic, and certified scuba diver. As MS took its toll on his mobility later in life, he became a licensed Ham radio operator, family genealogist, and ADA consultant. Charles battled MS since his 20’s, but always kept a positive attitude by telling jokes and stories, riding motorcycles and playing Santa Claus at the Straughn Fire Dept. His memory remained impeccable, remembering phone numbers, birthdays, anniversaries and the smallest details of events and people he would meet. Charles will be remembered by others for his infectious smile and spending time with his family. Those left to cherish his memory include his wife of 53 years, Lana K. (Lipp) Harsh; sons, Christopher (wife: Lesley) of Summit, New Jersey, Kent (wife: Michele) of Anderson, Carey (wife: Ruby) of Hartford City and Kevin of Anderson; seven grandchildren, eight great-grandchildren and one great-great grandchild. Brothers, Don (wife: Sharon) of Knightstown and Darrell (wife: Ginny) of New Castle; a sister Arlene (husband: Bill) Winingear of Muncie, numerous nieces and nephews. In addition to his parents, he is preceded in death by a brother, Danny Harsh; parents in-law, Tilden and Grace Lipp; brother-in-law, Homer Warner; a niece, Sherry Parmley and a nephew, Mike Warner. Funeral service will be held at 10 a.m. on Wednesday, October 5, 2016 at Sproles Family Funeral Home with Don Harsh officiating. Burial will follow in McCray Cemetery in Wilkinson. The family will receive friends from 4 – 8 p.m. on Tuesday, October 4, 2016 at the funeral home. Memorial Contributions may be made to the National Multiple Sclerosis Society at www.nationalmssociety.org. You may send the family a personal condolence at www.sprolesfamilycares.com. The Sproles family and staff are honored to serve the family of Charles Harsh.

Charles O. Harsh, 76, of Middletown, passed Friday afternoon, September 30, 2016 at Henry County Hospital after battling complications from Multiple Sclerosis. He was born on November 4, 1939 in Richmond, the eldest son of the late Daniel and... View Obituary & Service Information

The family of Charles Orville Harsh created this Life Tributes page to make it easy to share your memories.

Send flowers to the Harsh family.