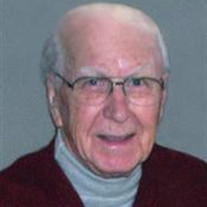 Charles M. Wilson, 89, of New Castle died October 1, 2011 at the Indiana Heart and Vascular Hospital in Indianapolis following a brief illness. He was born July 17, 1922 in Spiceland, a son of the late Kerney, Sr. and Mary Antrim Wilson. Charles graduated from Spiceland High School; attended Earlham College, Ball State University and Indiana Business College. He was retired from the Indiana Department of Revenue. Prior to working there, he was associated with Wilson’s Grocery in Spiceland. He was a member of the First Friends Meeting and the Keystone Sunday School Class. He was a former member and past president of the New Castle Lions Club and served on the board of the Indiana Lions Eye Bank for many years. He was a fifty year member of the New Castle Lodge No. 91, F. & A.M. He was a member of the American Legion Post No. 137 and the Veterans of Foreign Wars Post No. 3141. He was also a member of the Retired Indiana Public Employees Association, the Henry County School Reorganization Committee and served on the first school board of the South Henry School Corporation. During World War II, he was a flight instructor before becoming a bomber pilot with the 345th Bomb Group in the Southwest Pacific Theatre of War. He was later a member of and treasurer of the 345th Bomb Group Association. He is survived by his wife, Elaine; a son, Larry (wife: Mary Alice) Wilson of New Castle; a grandson, Brad; a great-grandson, Cameron and a great-granddaughter, Caitlin all of Yorktown; a niece, Shari (husband: Carl) Breeding of New Castle; a nephew, Tom (wife: Denise) Wilson of Brownsburg; a step-daughter, Patricia Crim of Fishers and a step-son, David (wife: Candy) Crim of Murfreesboro, TN. He was preceded in death by his parents; his first wife, the former Nelva Burcham; and his brothers, George and Kerney, Jr. A Memorial Service will be held at 2:00 p.m. Wednesday, October 5, 2011 at First Friends Meeting in New Castle followed by a fellowship hour in the church basement for all who wish to attend. Burial will be held privately in South Mound Cemetery. Memorial Contributions may be given to First Friends Meeting or Spiceland Alumni Association with envelopes available at the church. Arrangements are in the care of Sproles Family Funeral Home. You may send the family a personal condolence at www.sprolesfamilycares.com. Sproles Family Funeral Home is honored to serve the family of Charles Wilson.

Charles M. Wilson, 89, of New Castle died October 1, 2011 at the Indiana Heart and Vascular Hospital in Indianapolis following a brief illness. He was born July 17, 1922 in Spiceland, a son of the late Kerney, Sr. and Mary Antrim Wilson.... View Obituary & Service Information

The family of Charles M. Wilson created this Life Tributes page to make it easy to share your memories.