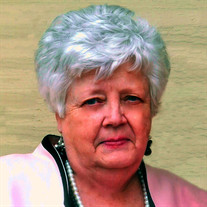 Cheryl Ann VanBuskirk Auxier, 75, of New Castle, IN, died Friday July 31, 2015 after putting up a brave and courageous fight to defy the odds of NASH and a Meningioma, diagnosed just over a year earlier. If ever there was a person with the will and spirit to live it was Cheryl Ann. Many times doctors would count her down and then later comment in awe what a strong and tough woman she was after battling setbacks beyond her control. She was born on November 3, 1939, the daughter of the late Carroll and Esther VanBuskirk, in New Castle, where she lived most of her life. Cheryl was a birthright Quaker at New Castle First Friends and was very active during the time of Tom Mullin. She completed high school in New Castle where she was active in Orchestra and played the Cello. She attended Lake Erie College for Women, and then later Indiana Business College where she graduated from. She later used her Degree to obtain a position at the New Castle State Hospital as an Administrative Assistant. In 1967 she married Omer Auxier and became a full time homemaker. Cheryl exceled as a Homemaker and mother, often being the home where the friends of her children always knew the door was open for a meal and some motherly advice. She was always very active in school events for the her children hosting many dinners, chaperoning school dances and being the mother you could count on for rides and any assistance needed. Her compassion and genuine interest for others shined through to make her “everybody’s mom” according to the now grown friends of her children. During her illness and pain, she would thank the staff for their kindness and was always told by the medical staff that she was their favorite. On Mother’s Day of this year, a CNA that had attended to her in 2014 at Methodist and since changed jobs, came back to Methodist for the afternoon to spend time with Cheryl because she had cultivated such a motherly bond with him. She had been a very active member of Tri-Kappa Sorority for many years. In the 1960’s she served as the Chapter President. While in Tri-Kappa she was very involved in drives for the Mental Health and orchestrated Christmas Gift Donations and Distributions. Cheryl leaves behind two children, Nancy G. Paul and Brian K. Auxier, as well as her husband of forty-eight years, Omer. She is also survived by her brother, Errol (wife: Betty) VanBuskirk in St. Joesph, Michigan and nieces and nephews, Jeff, Julie and Jay. Funeral services will be held at 11:00 a.m. Thursday, August 6, 2015 at Sproles Family Funeral Home with Pastor Rick Schoeff officiating. Burial will follow in Glen Cove Cemetery in Knightstown, where many of the VanBuskirk family members, including Cheryl’s parents, have been laid to rest. The family will receive friends from 4 – 8 p.m. Wednesday at the funeral home. Memorial Contributions may be offered to the American Liver Foundation. You may send the family a personal condolence at www.sprolesfamilycares.com. The Sproles family and staff are honored to serve the family of Cheryl Auxier.

Cheryl Ann VanBuskirk Auxier, 75, of New Castle, IN, died Friday July 31, 2015 after putting up a brave and courageous fight to defy the odds of NASH and a Meningioma, diagnosed just over a year earlier. If ever there was a person with the... View Obituary & Service Information

The family of Cheryl (VanBuskirk) Auxier created this Life Tributes page to make it easy to share your memories.