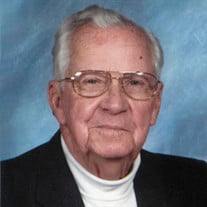 Clermont Bitler “Doc” Riggs, 91, formerly of Mt. Summit, passed away January 12, 2015 at Hancock Regional Hospital in Greenfield. He was born May 15, 1923 at the Henry County Clinic and named after Dr. Clyde Clermont Bitler. Doc attended Mt. Summit High School and worked on farms during his teenage years. He was hired by the Delco-Remy division of General Motors despite being under age. He continued his career for 41 years in Inventory Management. He was a member of the Mt. Summit Christian Church, a 72 year member of Lodge No. 91 F&AM, a 70 year member of the Scottish Rite, and was an active member of the Shrine Club. Survivors include his loving wife of 72 years, Mary Elizabeth (Cole) Riggs and his youngest son, Stephen Riggs, both of Greenfield; seven grandchildren, Todd Riggs and his wife, Barbara, of Ohio, Amy (Riggs) Deckard and her husband, Bob, of Georgia, Kristi (Riggs) Veal and her husband, Patrick, of Indiana, Scott Riggs and his wife, Lindsey, of Indiana, John Riggs and his wife, Cecila, of South Carolina, Sean Riggs of California, and Tara (Riggs) Boone and her husband, Johnathan, of South Carolina; two special daughters-in-law, Pam (Buckress) Riggs of South Carolina and Kathy (Hosking) Riggs of Indiana; 14 great-grandchildren and numerous loving nieces and nephews from both the Riggs and Cole families. Doc was preceded in death by his parents, John Howard Riggs and Florence (Davis) Riggs of New Castle; his oldest son Charles Michael “Coach” Riggs of South Carolina; two brothers, Robert Earl and Ronald Oliver Riggs of Springport; two sisters, Pyillis Anna (Riggs) Wallace and Ruth Maxine Riggs of New Castle. Funeral services will be held at 11:30 a.m. Saturday, January 17, 2015 at Sproles Family Funeral Home with Pastor Mark O’Brien officiating. There will be a Masonic Memorial Service at 11:00 a.m. Friends may call from 10:00 a.m. until 11:00 a.m. Saturday at the funeral home. Memorial contributions may be made to the Hancock Regional Hospital, Hospice Unit. You may send a personal condolence to the family at www.sprolesfamilycares.com. Sproles Family Funeral Home is honored to serve the family of Doc Riggs.

The family of Clermont "Doc" Bitler Riggs created this Life Tributes page to make it easy to share your memories.

Send flowers to the Riggs family.