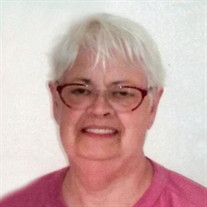 Cloma Gaye (Lewis) Bowlin, 81, of Springport, passed away unexpectedly on the morning of Thursday, January 2, 2020, in Morehead, Kentucky. She was born on September 29, 1938 in Rowan County, KY, a daughter of the late Sidney Clay and Elva Lorene (Richardson) Lewis. Cloma moved to the Muncie area in 1958 and worked for Owen’s Illinois and then worked in quality control for Ball Brothers/Alltrista in Muncie for 30 years before retiring. She was “Head Pres” of The Maxine Club, a group made up of her dear friends: Linda Bowlin, Connie Bowlin, Traci McCormick, Glenda Pitman, Sherry Raby, and Shannon Hall. Cloma would faithfully meet with her “dinner group” once per week enjoying a meal and fellowship with her dear friends, Bonnie, Billie Jean, and Sallie. She attended the Blountsville Christian Church and helped with the food drives for the church. Cloma was very outgoing and loved meeting new people. She especially loved rewarding children for their good behavior at restaurants by giving them a dollar bill. She was a huge UK Basketball fan, and enjoyed dinners with her family and spending time with her grandchildren and great-grandchildren. Those left to cherish her memory include her son, Jerry (wife: Connie) Bowlin of Losantville; a son-in-law, Pete Jones of New Castle; three grandsons, Brent (wife: Laura) Bowlin, Kurtis (wife: Cara) Bowlin, and Zach Jones; four great-grandsons, Dylan, Landon, Mason, and Evan; two great-granddaughters, Kennedy and Reagan; her sister, Janet Butcher of Morehead, KY and several nieces and nephews. In addition to her parents, she was preceded in death by her husband, James Bowlin in 2012; a daughter, Mitzi Gail Jones; a brother, Sidney Dale Lewis and an infant brother, and a brother-in-law, James Butcher. Funeral services will be held at 11: 00 am Tuesday, January 7, 2020 at Sproles Family Funeral Home with Pastor Jerry Bowlin officiating. Burial will follow in Mt. Summit Cemetery. Friends may call from 4 - 8 pm Monday at the funeral home. You may send the family a personal condolence at www.sprolesfamilycares.com. The Sproles family and staff are honored to serve the family of Cloma Bowlin.

Cloma Gaye (Lewis) Bowlin, 81, of Springport, passed away unexpectedly on the morning of Thursday, January 2, 2020, in Morehead, Kentucky. She was born on September 29, 1938 in Rowan County, KY, a daughter of the late Sidney Clay and Elva... View Obituary & Service Information

The family of Cloma Bowlin created this Life Tributes page to make it easy to share your memories.

Send flowers to the Bowlin family.