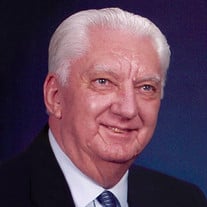 Curtis E. Caplinger Sr., 87, of Indianapolis, went home to be with the Lord on the evening of Friday, February 24, 2017 at Greenwood Meadows. He was born March 11, 1929 in Osgood, Indiana, a son of the late Cora Ellen (Conklin) and Benjamin Franklin Caplinger. Curtis had a smile and a winning personality which lent well to his success as an air filtration salesman. He worked for Schilling and Chilling and KSI Heating and Air for many years. He was saved at age 16 and loved the Lord with all his heart. On June 12, 1949, he married the love of his life, Olive Gadd. Curtis had been a member of the Southeastern Holiness Church since 1984 where he served as a Sunday School Teacher, Board Member and ministered along with his wife at nursing homes services each month. He was a member of Gideon’s International and loved to play the guitar. He enjoyed singing with his wife in church. Those left to cherish Curtis’s memory include his wife of 67 years, Olive Caplinger; three children, David L. Caplinger and Nicholas L. Caplinger both of Indianapolis and Molly F. (husband: Paul) Blackburn of Greenwood; eight grandchildren, Amy Riddle, Gabriel Caplinger, Elijah Caplinger, Elizabeth (husband: Peter) Dennis, Lisa (husband: Ryan) Kent, Andrew (wife: Courtney) Caplinger, Amber F. Blackburn and Stephen P. Blackburn; 11 great-grandchildren; two brothers, Dallas L. Caplinger and Walter A. Caplinger both of Bloomfield and three nieces and a nephew. He was preceded in death by a son, Curtis E. Caplinger, Jr.; a great-grandson, Caleb Dennis and a sister, Evelyn Baechle. Funeral services will be held at 2:00 pm Thursday, March 2, 2017 at Southeastern Holiness Church, 3957 Southeastern Ave. Indianapolis, with Pastor Ron Stevens and Pastor Harrold Taylor officiating. Burial will follow in Forest Lawn Memory Gardens in Greenwood. Friends may call from 4 - 8 pm Wednesday at the church. Arrangements have been entrusted to the care of Sproles Family Funeral Home in New Castle. Memorial contributions may be offered to the Southeastern Holiness Church or Gideon’s International. You may send the family a personal condolence at www.sprolesfamilycares.com. The Sproles family and staff are honored to serve the family of Curtis E. Caplinger, Sr.

Curtis E. Caplinger Sr., 87, of Indianapolis, went home to be with the Lord on the evening of Friday, February 24, 2017 at Greenwood Meadows. He was born March 11, 1929 in Osgood, Indiana, a son of the late Cora Ellen (Conklin) and Benjamin... View Obituary & Service Information

The family of Curtis E. Caplinger Sr. created this Life Tributes page to make it easy to share your memories.

Send flowers to the Caplinger family.