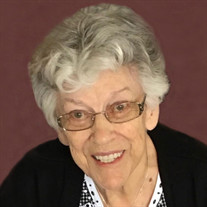 Mrs. Dacie Palestine “Pal” (Tabor) Hicks died peacefully on July 1, 2017 at IU Health West Hospital in Avon, just sixteen days shy of her 94th birthday. Dacie was born on July 17, 1923 in Soldier, Kentucky a daughter of Luther and Wanda (Webb) Tabor. After moving to New Castle, Indiana she met and married Stanley R. Hicks, January 29, 1940. During World War II, Dacie helped manufacture ammunition and aviation fuel tanks for the war effort as Stanley served in the U. S. Army in the Pacific Asian Theatre and European-African-Middle Eastern Theatre. In the 1950’s Dacie was employed at the New Castle State Hospital beginning her career in central supply and advancing over time into the up and coming field of electroencephalogram technology, where she excelled and received her certification, with merit, as a EEG Technician. She also worked as part of a research team performing cerebral blood flow, EEG’s and other research studies in the medical field of epilepsy. Eventually, Dacie was recruited by the Barrow Neurological Institute of St. Joseph’s Hospital, in Phoenix, Arizona where she was a member of the convulsive disorder unit, working with epileptic children. In the mid 70’s she was employed by Long Beach Memorial Hospital as a member of the nerve conduction studies team. Dacie performed clinical EEG recordings in a variety of offices before retiring from Methodist Hospital in Indianapolis. Her professional affiliations have been serving as Secretary Treasurer of the Indiana Society of EEG Technicians, Treasurer of the Western Society of EEG Technicians, member of the American Society of EEG Technicians, and Registered EEG Technologist. Mrs. Hicks is survived by her daughters, Carolyn Hicks Stout of Indianapolis, Ann Hicks Selvy, husband Michael, of Avon, and Jeannie Hicks Garner, of Indianapolis. Also surviving are 10 grandchildren and 14 great grandchildren. Apart from her immediate family is her large blended Tabor-Eden family of 10 kids with surviving brothers, George Tabor, wife Chris and Leon Tabor, wife Jeanette and two sisters-in-law, Wanda (Hicks) Crabtree, husband, Homer and Odean Hicks. In addition to her parents, she was preceded in death by her son, Stanley E. (Buddy) Hicks and husband, Stanley R. Hicks. Funeral services will be held at 1:00 pm Thursday, July 6, 2017 at Sproles Funeral Home, New Castle, Indiana with the Reverends Elwood Evans and Phil Brown officiating. Burial will follow in South Mound Cemetery West Lawn Addition. All are welcome to attend and celebrate Dacie’s life. Friends may call from 11:00 am until the time of service Thursday at the funeral home. You may send the family a personal condolence at http://www.sprolesfamilycares.com The family would like to thank the entire staff of IU West hospital for their dedication and exemplary care that they provided Dacie and her family during this closing chapter of Mrs. Dacie Hicks’s life.

The family of Dacie "Pal" Palestine Hicks created this Life Tributes page to make it easy to share your memories.

Send flowers to the Hicks family.