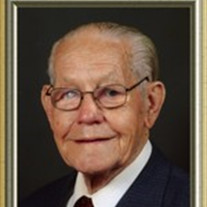 Rev. Daniel Stafford, 90, of Anderson, and formerly of Indianapolis, went home to be with the Lord, Tuesday, December 2, 2008, at the Monticello House in Anderson. He was born February 1, 1918, in Equality, Kentucky, a son of the late Albert Scott and Dora (Murphy) Stafford. Rev. Stafford was an ordained Elder in the Church of the Nazarene. For 10 years, early in his ministry, he pastored churches in Louisiana, Texas and Arkansas. For over 40 years he traveled throughout the U.S. and other countries in evangelism with an emphasis on the doctrine of holiness. He was the author of 15 books on a variety of subjects and for recreation was an avid fisherman. He is survived by four children; Patricia (husband: Rev. James W.) Smith of Bethany, Oklahoma, James E. (wife: Charol) Stafford of Houston, Texas, Barbara (husband: John M.) Baker of Anderson and David H. (wife: Jackie) Stafford of Oklahoma City, Oklahoma; 12 grandchildren, Melody Harding, Daniel Smith, Mychelle Smith, Stacey Bolton, Stephanie Cleveland, Sidney Stafford, Susan Ochoa, John Mark Baker, Aaron Baker, Jason Baker, Lorissa Huckaby and Angelia Webb; 23 great-grandchildren, and several nieces and nephews. He was preceded in death by his wife of 55 years, Edna, in 1993; a son, Robert Stafford; three brothers, including Rev. J.D. Stafford, and one sister. Funeral services will be held at 11:00 a.m. Saturday, December 6, 2008 at the Independent Nazarene Church, 5152 Hornet Ave., Beech Grove with the Rev’s. Gene Hood, Tim Wiford, and James Smith officiating. Burial will follow in Forest Lawn Memory Gardens in Greenwood. Friends may call from 4 – 8 p.m. Friday at the Independent Nazarene Church in Beech Grove. Arrangements are in the care of Sproles Family Funeral Home in New Castle. Memorial Contributions may be made to Union Bible College, P.O. Box 900 Westfield, IN 46074. You may send the family a personal condolence at www.sprolesfamilycares.com.

Rev. Daniel Stafford, 90, of Anderson, and formerly of Indianapolis, went home to be with the Lord, Tuesday, December 2, 2008, at the Monticello House in Anderson. He was born February 1, 1918, in Equality, Kentucky, a son of the late Albert... View Obituary & Service Information

The family of Rev. Daniel Stafford created this Life Tributes page to make it easy to share your memories.

Rev. Daniel Stafford, 90, of Anderson, and formerly of Indianapolis,...

Send flowers to the Stafford family.