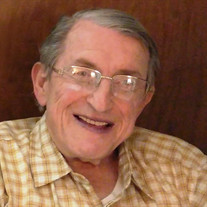 David Lloyd Frederick, Sr., 83, of Cincinnati, formerly of Souderton and Philadelphia, PA, peacefully went to his heavenly home on Friday, October 13, 2017, at Meadowbrook Care Center. Dave was born August 24, 1934, a son of the late Norwood Clayton and Martha Catharine (Metz) Frederick, while residing in Franconia Township, PA. Dave grew up on the family farm in Franconia where along with his siblings helped their father with the animals and the crops. He attended school through the 10th grade. After dropping out of school, Dave had a number of different jobs until the family moved to Philadelphia where he began his career as a technician at Harbisons Dairy. He remained there until the plant closed down in the 1980s. Following Harbisons, he worked as a maintenance man for the main offices of Mid-Atlantic Dairy Cooperation, until he retired around 2000. When Dave wasn’t working, he enjoyed tinkering with cars, having a cup of coffee at a local diner where he would know all the locals by name, being active in his church as a Treasurer and Sunday School Superintendent, and working the daily newspaper puzzles such as cryptograms, word searches, and crossword puzzles. After he moved to Cincinnati, his main hobby was completing jigsaw puzzles and spending time with his family. Those left to cherish his memory include his son, David L. (wife: Charlotte) Frederick Jr. of Cincinnati, OH; daughter, Lori (husband: Keith) Waggoner of Caldwell, ID; seven grandchildren, David L. (wife: Bethany) Frederick III, Anthony Frederick, Alicia (husband: David II) Miller, Christiana Frederick, Trey Waggoner, Kassady Waggoner and Cole Waggoner; one great-grandchild, Channing David Frederick; sister, Rebecca Frederick of Souderton, PA; sister -in-law, Pearl Parks of McGaheysville, VA, along with numerous nieces, nephews and extended family. Along with his parents, he is preceded in death by his loving wife, Rosalie Frederick (2016); siblings, Russell, Anna, John Mark, George, Clayton, Martha Catharine, Jacob, Isaac, and Paul; brothers-in-law, William “Bill” Rosenberry (1998) and Fred Parks (2014). In lieu of flowers, monetary gifts may be given to the Frederick Scholarship Fund of God’s Bible School and College which enables students with financial needs to receive scholarship funding. https://www.gbs.edu/give/give-now/ Funeral services will be held at 12:00 noon, Tuesday, October 17, 2017 at Kenwood Bible Methodist Church 4555 Kugler Mill Rd, Cincinnati, OH 45236 with Pastor Keith Waggoner and Pastor Travis Johnson officiating. Burial will follow at Rose Hill Cemetery in Mason, OH. The family will receive friends from 10 AM – 12 PM, prior to the service at the church. You may send the family a personal condolence at www.sprolesfamilycares.com. The Sproles family and staff are honored to serve the family of David Frederick Sr.

The family of David Lloyd Frederick Sr. created this Life Tributes page to make it easy to share your memories.

Send flowers to the Frederick family.