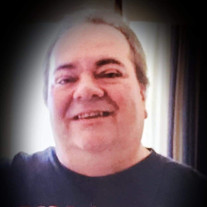 David James Morell, 52, of Muncie, went to be with the Lord on Thursday, August 13, 2020 at 1:30 A.M. at home surrounded by his family. He passed away from an unexpected illness. David was born on October 30th, 1967, in Dayton, OH to Edwin Orman Stout and Barbara Margaret Stout. Barbara later remarried and David was adopted by Robert Eugene Morell. David was an avid sports fanatic, especially when it came to football. David was the biggest Pittsburgh Steelers fan and never missed a chance to watch them play. He watched the Pittsburgh Steelers play their rival, the Cincinnati Bengals, in person for the first time on October 14th, 2018 with his daughter. David's additional sports interests included: golf, watching the Indiana Pacers and the Cincinnati Reds. David loved to play Monopoly, card games, frisbee, ride and show horses, enjoyed cookouts, spend time with his daughter, play with his grandcat Onyx, classic cars (especially a '79 Firebird Trans Am), and go to the casino. The thing he most enjoyed in life, more than anything, was his daughter Destini Angelika Morell. From the moment she was born, she was his whole world and all that he lived for. David was a one of a kind man, father, and friend. He was kind to everyone he met and could make a friend out of anyone. It never rained on his parade. Those left to cherish his memory include: his daughter Destini Angelika Morell (Tressalynn Owens), 25, of Muncie, IN. Special friend and mother of his daughter, Sandra Elliott (John Noland) of Milton, IN and Kanasta Johnson (Jason Gaddis). His aunt, Peggy Jameson (Leslie Hendrix) of Jeffersonville, IN. Best friends, Brandi Bowne, David Herrman, and Denise Harper and his many other family and friends. Those that have preceded him in death; father, Edwin (Nancy) Stout; mother, Barbara Morell and adopted father Robert Morell; sister Missy Michaels, and aunt, Lori Stout Smith. Celebration of life to be announced at a later date. You may send the family a personal condolence at www.sprolesfamilycares.com. The Sproles family and staff are honored to serve the family of David Morell.

David James Morell, 52, of Muncie, went to be with the Lord on Thursday, August 13, 2020 at 1:30 A.M. at home surrounded by his family. He passed away from an unexpected illness. David was born on October 30th, 1967, in Dayton, OH to Edwin... View Obituary & Service Information

The family of David James Morell created this Life Tributes page to make it easy to share your memories.

Send flowers to the Morell family.