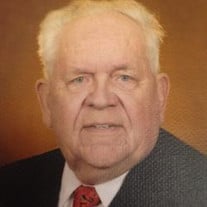 David Eugene Wilson, 80, of Anderson, went home to heaven on Saturday, April 19, 2014 at Bethany Pointe Health Campus in Anderson. The fourth child of Calvin W. "Fred" and Mary (Osborn) Wilson, David was born October 28, 1933 in Wayne County, Indiana.David lived nearly all of his life in Indiana, his childhood was spent in Randolph County where he attended grade school at Lincoln near Winchester. When his parents moved to Westfield in 1948, he attended high school at Union Bible Seminary and finished his senior year at the Westfield-Washington School graduation in 1951.His college education was at Indiana Business College in Indianapolis where he received a certificate in accounting. His career of 43 years was spent entirely with Indiana Farm Bureau Co-op Association, mostly in the accounting department. David retired in 1996 and spent his retirement years enjoying his grandchildren and playing his accordion at nursing homes and his church, Grace Holiness Church in Anderson. David is survived by his wife, Ardeth (Luther) Wilson, whom he married in 1956; three sons, David Paul (wife: Barbara) Wilson of Anderson, John (wife: Gwen) Wilson of Joplin, MO and Stephen Wilson of Greenwood; eight grandchildren and one great-granddaughter; six nieces; four nephews and two sisters-in-law, Juanita Wilson of Indianapolis and Linda Kelekoma of Hawaii.Those who were waiting for him to join them in heaven were his parents, two brothers, Max and Donald Wilson; his only sister, Helen and her husband, Richard Hiatt and his mother-in-law, Alice Luther. Funeral services will be held at 10:30 a.m. Wednesday, April 23, 2014 at First Church of the Nazarene, 2324 Jackson St., Anderson, IN 46016, with Rev. Tim Wiford and Rev. Jonathan Edwards officiating. Burial will follow in Maplewood Cemetery. Friends may call from 4-8 p.m. Tuesday and one hour prior to the service Wednesday both at the church.Memorial contributions may be offered to the Grace Holiness Church, 3325 Dr. Martin Luther King Jr. Blvd., Anderson, IN 46013 or the Christian Center, 625 Main St., Anderson, IN 46016.Arrangements are entrusted to the care of Sproles Family Funeral Home in New Castle. You may send the family a personal condolence at www.sprolesfamilycares.com.The Sproles family and staff are honored to serve the family of David E. Wilson.

The family of David Eugene Wilson created this Life Tributes page to make it easy to share your memories.

David Eugene Wilson, 80, of Anderson, went home to heaven on...