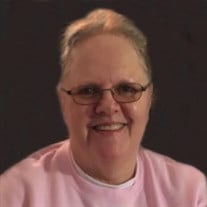 Debbie Darlene (Smith) Catron, 62, of New Castle, went to her heavenly home to be with the Lord, Monday, December 17, 2018 while surrounded by her loving family at her home. She was born on a bright Monday afternoon at her grandparent’s home, Paul and Pauline Aker in Carthage on October 22, 1956 to Virginia B. “Sally” Smith and the late Kenneth Earl Smith. Debbie was a graduate of Knightstown High School in 1975 and played the clarinet in Carthage Jr. Sr. High Band. She was a member of the 4-H Ripley Needletwisters Club for nine years. While still young, Debbie played on the Knightstown Women’s Softball Team and won the 1981 MVP during the All-Star game. She worked at RCA for three years and decided that factory work was not her calling. She worked to be a Tupperware Manager for five years and led a successful unit. She promoted her mother, Sally Smith as Tupperware Manager during that time. Debbie’s unit received the #1 Rookie Unit trophy for quarterly sales from July to December 1983 and she received #19 in sales for the same quarter at Tupperware International home in Orlando, Florida. Her next 28 years of employment was working for the state of Indiana, at the Department of Public Welfare in 1987, the New Castle State Developmental Center until it closed in 1998, and then for the Indiana Department of Health as an accountant. She returned to New Castle from Indianapolis to spend the next 15 year at the Correctional Training Institute, which she truly enjoyed. Debbie was on the cradle roll and attended Wesleyan Methodist Church in Carthage. She was a member of the Calvary Baptist Church in Carthage where she was saved and baptized and served as the Sunday school teacher and was a Junior Church helper. She loved playing gospel music for His Glory. Debbie learned to play the mandolin in Kentucky one weekend and played with the Catron Family at churches, nursing homes and in homes in Missouri, Illinois, Kentucky and Indiana. She also enjoyed playing gospel music with her husband, Jack, and others at Raintree Square and several nursing homes in New Castle, including Glen Oaks Health Campus, The Waters, Heritage House, Green Tree and Stonebrooke. Her favorite places to play were the Greensboro Nazarene Church and Pilgrim Holiness Fellowship Halls. Debbie joyfully served for 11 years as the Sunday School Secretary for the Pilgrim Holiness Church, where she loved her church family. She enjoyed the Women of Worth meetings and was on the retreat planning committee. Of the 35 states that she visited, her favorite vacation spots included Montana, sitting around the campfire playing music and going to the Pilgrim Family Church Camp. Debbie enjoyed baking, cooking, knitting, cross-stitching, quilting, comping, working jig saw puzzles and bowling with the Women’s Monday night team and received the 1990 Best Improved with Handicap. Jack and Debbie organized the Goodson Catron Family Reunion for 18 years. She was an Amateur Radio Operator KB9LEU. She loved being with family and friends and prayed for each one daily. Debbie accepted the Lord as her Savior and is looking on the streets of glory for you to join her in heaven. Those left to cherish Debbie’s memory include her husband, Andrew “Jack” Catron; her mother, Sally Smith of Knightstown; her heart children, Kathy Sue (Arlie) Stroud of Darby, Montana, Jack Lee Catron of Belgrade, Montana, Max Homer Catron and Karen Catron both of New Castle; 16 grandchildren; 20 great-grandchildren; one brother, Jack Lynn Grizzell (friend, Lisa Neal) of New Castle; two sisters, Tammy Jo Chew of Knightstown and Cindy Jane (husband: Dave) McGinnis of Greenfield; a brother-in-law, Omer (wife: Janet) Catron of Oklahoma City, OK; three sisters-in-law, Mae (husband: Harlan) Sannes of Rockwell, NC, Gladys James of Alamogordo, NM and Marie Antrobus of New Castle; two uncles; several nieces and nephews and a special sister friend, Vicky Catron of Corvallis, Montana. She was preceded in death by her father, Kenneth Smith; two sons, Gerald Allen Catron and Scott Ray Catron; a grandson, Gregory Jones; grandparents, Paul and Pauline Aker, and two sisters, Judy Ann Langley and Loretta Kay Penn. Funeral services will be held at 11:00 am Friday, December 21, 2018 at Sproles Family Funeral Home with Rev. Don Raines officiating. Burial will follow in South Mound Cemetery West Lawn Addition. Friends may call from 4 - 8 pm Thursday at the funeral home. You may send the family a personal condolence at www.sprolesfamilycares.com The Sproles family and staff are honored to serve the family of Debbie Catron.

Debbie Darlene (Smith) Catron, 62, of New Castle, went to her heavenly home to be with the Lord, Monday, December 17, 2018 while surrounded by her loving family at her home. She was born on a bright Monday afternoon at her grandparent&#8217;s... View Obituary & Service Information

The family of Debbie Darlene (Smith) Catron created this Life Tributes page to make it easy to share your memories.

Send flowers to the Catron family.