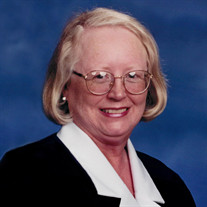 Delpha M. Brewington, 65, of Mooreland, went home to be with the Lord on the morning of Sunday, May 15, 2016, at IU Ball Memorial Hospital in Muncie. She was born on July 15, 1950 in New Castle, Indiana, a daughter of William “Bill” Adkins and Lanie (Ferguson) Adkins.   Delpha graduated from Blue River Valley High School in 1969.  She had a passion for helping others including a career working with the mentally handicapped and also as a volunteer chaplain as long as her health allowed.  Delpha was a devoted Christian and known to many as a prayer warrior and was often praying for things God had laid on her heart.  She married the love of her life, Nathan Brewington Jr., on July 3, 1970 and together they enjoyed 46 years of marriage.  They were blessed with two children Nathan S. Brewington III and Tammy Ann Brewington-Robbins both of Indiana.  One of her favorite things in life was being with her seven grandchildren.  Delpha was a wonderful Wife, Mother, Grandmother and Friend and will be missed by many. Delpha was preceded in death by her father, William Adkins, as well as several aunts and uncles.   She is survived by her mother, Lanie Adkins; her husband, Nathan Brewington Jr.; son, Nathan S. Brewington III (Wife Exie); daughter, Tammy Robbins (Husband Matt), grandsons, Kyle Brewington, Josh Brewington, Ryan Brewington; granddaughters, Abigail Robbins, Elyssa Brewington, Lauren Robbins and Kendra Brewington as well as two brothers and a sister. Funeral services will be held at 11:00 a.m. Wednesday, May 18, 2016 at Sproles Family Funeral Home with Rev. Nathan Brewington Jr. and Delbert Adkins officiating. Burial will follow in Mooreland Cemetery. The family will receive friends from 4 – 6 p.m. Tuesday at the funeral home. You may send the family a personal condolence at www.sprolesfamilycares.com. The Sproles family and staff are honored to serve the family of Delpha Brewington.

The family of Delpha Mae Brewington created this Life Tributes page to make it easy to share your memories.

Send flowers to the Brewington family.