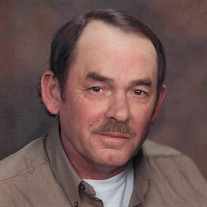 For everything there is a season. A time to till, a time to plant, a time to grow, and a time to harvest. Dennis H. McKinsey, 63, beloved husband of Terri, proud daddy to Clint and Michelle and best Pap to Ricky, Alexis, Alex, Joe and Alyse left this earthly place on Monday, March 20, 2017. Dennis’s love of the land began on the family farm outside Blountsville. He was born on June 11, 1953, the son of Ralph E. and Mary Louise (Walters) McKinsey. He attended Blountsville Elementary and graduated from Union High School in Modoc in 1971. It was in that year that a young brown-eyed girl caught his heart. It was love at first sight and she’s remained his constant companion and best friend for 45 years. After his marriage to Terri, he continued farming with his dad and began raising his children in the home his grandfather built, right down the road from his folks. It was there that he farmed for many years and built a successful farrowing operation. Dennis also was employed for T & R Ag Service in Losantville, where he was a custom applicator with flotation field equipment, dry and liquid. He did soil samples and analysis programming, selling of agriculture products to farmers; maneuvering equipment with sprayer calibrating of chemicals and fertilizer and maintenance of equipment. Farming wasn’t the same after the death of his dad, times changed and Dennis left his work with the earth for a job at Warner Gear for 16 years as a millwright. With rumors of the plant closing, he then took a job with Chrysler Corporation in Kokomo as a millwright, retiring August 1, 2015 with health concerns. Nothing was more important to Dennis than watching his children and then his precious grandchildren participate in school sports. When he was between ball games, he was putting on his leathers and flying down the road on his Harley. Dennis leaves behind to cherish memories of water balloons, slip and slides, jumping on the bed and the traditional family croquet game, his always cherished Terri (McGaha) McKinsey; his children, son, Clint (Emily) and boys, Alex and Joe of Lawrenceburg, IN; daughter, Michelle (Rick) Lamb and children, Ricky, Alexis (Mikey) and Alyse Lamb of Muncie; Sisters, Patty (Ray) Johnson of Muncie and Sharon (Todd) Vardaman of Selma; Brother, Jeff ( Patty) McKinsey of Blountsville; nieces and nephews; Mark Knipp, Melanie Knipp and Craig McKinsey; sister-in-law, Sandy (Bill) Appeldorn, brothers-in-law, Steve (Mary) McGaha and Roy “Junior” McGaha; a special cousin, Diana Weidman; life-long friend, Bill Jordan and special people in his life, Cierra, Tessa, Alexis, Hannah, Danica and several aunts and cousins. In addition to his parents, he was preceded in death by his cousins, Ronnie Felton and Micki Whitehead, his mother-in-law, Mary Allice Johnson and his father-in-law, Roy McGaha. Services celebrating the life well lived by Dennis McKinsey will be held at 2:00 pm on Sunday, March 26, 2017, at Sproles Family Funeral Home with words of encouragement and hope given by a long-time friend, Rev. Steve Nelson of Senegal, West Africa. Burial will follow in Mooreland Cemetery. Calling will be held from 3 – 7 pm on Saturday at the funeral home. Memorial contributions may be offered to the Fellowship of Evangelical Churches - West Africa Initiative, 1420 Kerrway Court, Fort Wayne, IN 46805, www.FECMinistries.org You may send the family a personal condolence at www.sprolesfamilycares.com. The family wishes to express their gratitude to the following: HCH - ICU for the kind and professional care given to Dennis during his stay. Henry County Hospice - Tina who showed us, with her light and smile, what being chosen to serve families who have a loved one leaving is all about. Chrystal, who made Dennis comfortable and Amy and Rhonda who came and made our lives so much more bearable. The Sproles family and staff are honored to serve the family of Dennis McKinsey.

For everything there is a season. A time to till, a time to plant, a time to grow, and a time to harvest. Dennis H. McKinsey, 63, beloved husband of Terri, proud daddy to Clint and Michelle and best Pap to Ricky, Alexis, Alex, Joe and Alyse... View Obituary & Service Information

The family of Dennis H. McKinsey created this Life Tributes page to make it easy to share your memories.

For everything there is a season. A time to till, a time to plant,...

Send flowers to the McKinsey family.