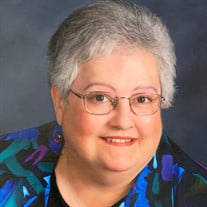 Diane Lee Keesling, 77, of Winchester, passed away on the afternoon of Monday, September 23, 2019 at Reid Health in Richmond. She was born May 10, 1942 in Muncie, Indiana, a daughter of the late Paul E. and Virginia E. (Coon) Keesling. Diane attended Center School until 9th grade. She graduated Valedictorian of the 1960 class at Union High School, was a class officer, captain of the cheer block, and voted most popular by her senior classmates. She earned her Bachelor’s Degree in Early Elementary Education from Indiana University and subsequently a Master’s Degree in Special Education from the University of Illinois. When one of the nurses at the Reid Hospital asked her if she went to Purdue, she said, “Uh, no. I went to IU and was going to save the world through kindergarten”. Diane was gifted in her generosity, kindness and love for children and adults with special needs. Her life of service was focused around early childhood education and serving special needs children, adults, and their families. She taught early education in various public schools and opened a daycare in Indianapolis (Children’s Place) that cared for children with special needs. She was case manager and teacher for severe developmentally disabled children at Noble Centers in Indianapolis. She also served as a case coordinator for Muscatatuck State Development Center, Jay-Randolph Developmental Services, and Indiana Department of Social Services. She loved singing, drama and acting both as a performer and director. Diane was in IU Choral and enjoyed directing several small civic theaters. She also directed plays for Union High School, Modoc. Diane’s faith and love of Christ was an essential part of her life. She was raised in the Methodist Church at New Burlington and later Modoc. She also served at Hagerstown Methodist and First Church of Christ in Lynn. She taught Sunday school, helped with VBS, and sang solo or in church choir any time given the opportunity. She was “Aunt Diane” to her 20 beloved nieces and nephews, and also to almost anyone younger than her that she got to know. As some of her family stated, “What a blessing to have an aunt like her. Everyone should have an ‘Aunt Diane’ and, ‘Our family owes her a debt of happiness that we must keep passing on.’” She never forgot a birthday and always stuffed birthday cards with confetti hoping to “get” someone who forgot to open their card over a waste can. “Aunt Diane - forever my favorite birthday song singer and red lipstick wearer.” Those left to cherish Diane’s memory include her brother, Richard (Nina) Keesling of Kennett Square, PA ; her sister Ruth Bracken of Modoc; a brother, Donnie (Barbara) Keesling of Modoc; nieces and nephews; Carrie Keesling Roth, of Piedmont, OK, Mikey (Brenda) Bracken of Yorktown, Jody Saylor of La Habra, CA, Brad “Bradford” (Lisa) Keesling of Modoc, Kimberly Keesling of Lafayette, Brittany Keesling of Philadelphia, PA, and Tyler Keesling of Chicago, IL, and great-nieces and great-nephews, Corey, Joshua, Justin, Alex, Sam, Harper Elizabeth, Kayla Grace, Rosie (Posie), Amanda (Panda), Jayde, Emma, Leah, and Olivia. Per Diane’s wishes there will be no public service. Contributions in Diane’s memory may be offered to the Community Foundation of Randolph County, 120 W. Washington St., Winchester, IN 47394 or www.randolphcountyfoundation.org. Arrangements have been entrusted to Sproles Family Funeral Home in New Castle. You may send the family a personal condolence, story or memory at www.sprolesfamilycares.com. Diane’s family has requested notes with memories, stories and pictures.

Diane Lee Keesling, 77, of Winchester, passed away on the afternoon of Monday, September 23, 2019 at Reid Health in Richmond. She was born May 10, 1942 in Muncie, Indiana, a daughter of the late Paul E. and Virginia E. (Coon) Keesling. Diane... View Obituary & Service Information

The family of Diane L. Keesling created this Life Tributes page to make it easy to share your memories.

Diane Lee Keesling, 77, of Winchester, passed away on the afternoon...

Send flowers to the Keesling family.