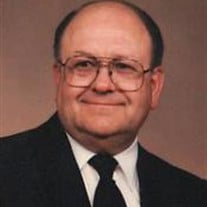 Rev. Don Staley, 74, of Indianapolis, went home to be with the Lord, Thursday, October 25, 2012 following a lengthy illness. He was born January 16, 1938 in Columbus, a son of the late Arthur and Dorothy (Garris) Staley. Rev. Staley was a 1956 graduate of Columbus High School and earned Theology and Christian Workers degrees in 1961 from God’s Bible School & College in Cincinnati, Ohio. On July 31, 1959 he married the love of his life, Dorothy Frances Hollabaugh. He served in full time ministry for 45 years with nearly 25 of those years as Pastor of Southeastern Holiness Church in Indianapolis. He held ministerial credentials with the Wesleyan Methodist Church, Bible Covenant Church and the International Conservative Holiness Association. He served on the boards of the ICHA, Church of the Bible Covenant and Union Bible College. In his spare time he loved to cook and enjoyed hunting and going to auctions. He is survived by his wife of 53 years, Dorothy Staley; three children, Vanessa Hopper of Indianapolis, Randy (wife: Kim) Staley of New Palestine and Vonda (husband: Bill) O’Conner of Tunkhannock, PA; five grandchildren, Deborah (husband: Josh) Leonard, Felicia Staley, Jeremy (wife: Tiffany) Staley, Hailey O’Conner and Angelina O’Conner; a sister-in-law, Sheila Staley of Columbus; two brothers-in-law, Gordon and Melvin Hollabaugh both of Arizona; a special childhood friend, Lynn Rarey and several nieces and nephews. He was preceded in death by a brother, Larry Dean Staley. Funeral services will be held at 11:00 a.m. Monday, October 29, 2012 at Southeastern Holiness Church, 3957 Southeastern Avenue, Indianapolis, with Pastor Ron Stevens officiating. Burial will follow in Garland Brook Cemetery in Columbus. Friends may call from 3 – 8 p.m. Sunday at the church and one hour prior to the service Monday at the church. Memorial contributions may be made to the Southeastern Holiness Church Building Fund or Union Bible College. Arrangements have been entrusted to the care of Sproles Family Funeral Home in New Castle. You may send the family a personal condolence at www.sprolesfamilycares.com. Sproles Family Funeral Home is honored to serve the family of Rev. Don Staley.

Rev. Don Staley, 74, of Indianapolis, went home to be with the Lord, Thursday, October 25, 2012 following a lengthy illness. He was born January 16, 1938 in Columbus, a son of the late Arthur and Dorothy (Garris) Staley. Rev. Staley... View Obituary & Service Information

The family of Rev. Don Staley created this Life Tributes page to make it easy to share your memories.

Send flowers to the Staley family.