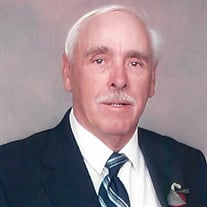 Donald George Antrobus, 86, of New Castle, passed away on the morning of Friday, December 29, 2017 at Harrison Terrace in Indianapolis. Don was born on November 6, 1931, in Los Angeles, California, the son of the late George Horace and Eleanor (Crawford) Antrobus. His family moved to San Jose, CA, when he was four years old and Don’s father passed away when he was eight. He served in the US Navy during the Korean War. Don was stationed in Hawaii on the USS Matthews at Hickam Air Force Base and Diamond Head Naval Base. Don was a car enthusiast and raced super modified cars for many years at the T-Car Raceway in Carson City, NV and in Bakersfield, CA and Reno, NV. He also rebuilt antique cars. Don was an avid golfer scoring a hole in one at the Cala Mesa Golf Course in Yucaipa, CA. Don had an outgoing personality and loved people. He lived down the street from Liberace and cared for his dogs. Don also owned a snowmobile rental and tow truck service in Tahoe, NV. Once he retired Don enjoyed going to flea markets with his wife, Marie. Don is survived by his loving wife, Marie (Catron) Antrobus; a son, Donald Antrobus; a step-son, Daniel Burt Mobley and a sister, Barbara Antrobus of San Jose, CA. He was preceded in death by his parents; two sisters, Donna Spono and Beverly Cochren and a step-son, Charles Rex Mobley. Funeral services will be held at 1:00 pm Wednesday, January 3, 2018 at Sproles Family Funeral Home with Pastor Don Raines officiating. Burial will follow in South Mound Cemetery West Lawn Addition with Military Honors conducted by continents from the US Navy and the VFW and American Legion. Friends may call from 11:00 am until the time of the service Wednesday at the funeral home. You may send the family a personal condolence at www.sprolesfamilycares.com. The Sproles family and staff are honored to serve the family of Donald George Antrobus.

Donald George Antrobus, 86, of New Castle, passed away on the morning of Friday, December 29, 2017 at Harrison Terrace in Indianapolis. Don was born on November 6, 1931, in Los Angeles, California, the son of the late George Horace and Eleanor... View Obituary & Service Information

The family of Donald George Antrobus created this Life Tributes page to make it easy to share your memories.

Donald George Antrobus, 86, of New Castle, passed away on the...

Send flowers to the Antrobus family.