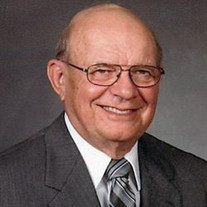 Donald Lee Beck, 79, of New Castle, passed away peacefully at his home surrounded by his family on Thursday, May 22, 2014. He was born on February 8, 1935 in Tipton County, a son of the late Arthur and Mildred (Weismiller) Beck. Don lived in Tipton County before moving to Henry County in 1960. He graduated from Tipton High School in 1953 after having attended eight years at Emmanuel Lutheran School in Tipton. Donald was a sergeant in the U.S. Army Signal Corps in Germany from 1957 to 1959. He then worked as a shipping agent for the Nickel Plate Railroad. In 1997, he retired from Avesta Sheffield in New Castle where he was a shipping and receiving supervisor for thirty-two years. In his younger years, he was active in the Tipton County Rural Youth, where he met his wife of fifty-three years, Doris (Irvin) Beck. After moving to New Castle, he became a member of the Holy Trinity Lutheran Church and was a member for 53 years. He was also a past council member for the church, serving as property chairman as well as a committee member. Don enjoyed woodworking and made several woodworking projects for the church. He also liked making doll furniture and wooden toys for his seven grandchildren. In addition to woodworking, he took pleasure in gardening and working outside. He and his wife shared many trips to various destinations in the United States and Europe during their retirement years. Most of all, he loved spending quality time with his family, especially his grandchildren. He is survived by his wife, Doris; three children, Steve (Donna) Beck of Lagro, Barbara (Jeff) Bailey of Cumberland and Linda (Mike) Langford of Avon; seven grandchildren, Stephanie and Leanne Beck, Andrea and Lauren Bailey and Grace, Andrew and Katherine Langford; a sister, Eunice Schulenburg of Cicero and several nieces and nephews. In addition to his parents, he was preceded in death by a brother, Robert. Services will be held at 10:30 a.m. Wednesday, May 28, 2014 at Holy Trinity Lutheran Church with Pastor Bill Chamberlin officiating. Burial will follow in South Mound Cemetery West Lawn Addition with military honors conducted by contingent from the U.S. Army, the V.F.W. and American Legion. The family will receive friends from 4 – 8 p.m. Tuesday at Sproles Family Funeral Home and one hour prior to the service at the church. Memorial contributions may be given to Holy Trinity Lutheran Church, 535 S. 14th St., New Castle, IN 47362 or Henry County Hospice, 1000 N. 16th St., New Castle, IN, 47362. You may send the family a personal condolence at www.sprolesfamilycares.com Sproles family and staff are honored to serve the family of Don Beck.

Donald Lee Beck, 79, of New Castle, passed away peacefully at his home surrounded by his family on Thursday, May 22, 2014. He was born on February 8, 1935 in Tipton County, a son of the late Arthur and Mildred (Weismiller) Beck. Don... View Obituary & Service Information

The family of Donald Lee Beck created this Life Tributes page to make it easy to share your memories.

Donald Lee Beck, 79, of New Castle, passed away peacefully at...

Send flowers to the Beck family.