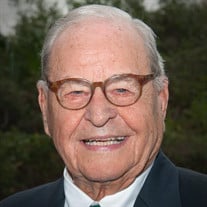 Donald C. Danielson, Indiana philanthropist and business leader, died Thursday at his home in New Castle after a brief illness. He was 95. &#8220;Danny&#8221; Danielson served as vice chairman of City Securities, the oldest and largest Indiana-based... View Obituary & Service Information

The family of Donald C. Danielson created this Life Tributes page to make it easy to share your memories.

Send flowers to the Danielson family.