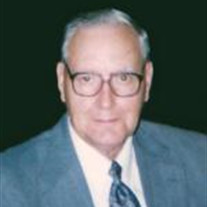 Donald A. Warinner, 79, of Markleville, went home to be with his Lord and Savior Jesus Christ on Tuesday, January 18, 2011 at Henry County Hospital following a lengthy and courageous battle with Parkinson’s disease. He was born February 16, 1931 in Albany, Kentucky, a son of the late Hiram Porter and May (Andrews) Warinner. Donald was employed with Firestone in Noblesville for over 36 years. He served in the U.S. Army during the Korean War in the 101st Airborne division as a Tank Operator. He was a member of the Central Wesleyan Church in New Castle for over 50 years, where he served as Sunday School Superintendent, Sunday School Teacher and Song Leader. He was an avid outdoorsman and enjoyed bird watching and gardening, especially growing tomatoes. He loved watermelon, playing the harmonica and horseshoes. He is survived by his wife of 55 years, Bonnie (Bell) Warinner; a son, Gary (wife: Diane) Warinner of Boyers, PA; a daughter, Krista (husband: Steve) Mains of Middletown; five grandsons, Kirk (wife: Heather) Warinner of Clermont, KY, Ryan (wife: Beth) Warinner of Richmond, VA, Eric and Troy Warinner both of Boyers, PA and Caleb Kinser of Pendleton; five great-grandchildren, Reagan, Zachary, Leeland and Rylie Warinner and Luke Kinser; a sister, Maggie Warinner of Albany, KY; and several nieces and nephews. He was preceded in death by four brothers, Floyd, Fount, Leslie and Joe Warinner and two sisters, Lily Magazeni and Flora McKinley. Funeral services will be held at 2:00 p.m. Monday, January 24, 2011 at Sproles Family Funeral Home with the Revs Gary Warinner, Lloyd Van Meter and Glen Raney officiating. Burial will follow in Green Hills Memory Gardens. Friends may call from 4 – 8 p.m. Sunday at the funeral home. You may send the family a personal condolence at www.sprolesfamilycares.com Sproles Family Funeral Home is honored to serve the family of Donald Warinner.

Donald A. Warinner, 79, of Markleville, went home to be with his Lord and Savior Jesus Christ on Tuesday, January 18, 2011 at Henry County Hospital following a lengthy and courageous battle with Parkinson&#8217;s disease. He was born February... View Obituary & Service Information

The family of Donald A. Warinner created this Life Tributes page to make it easy to share your memories.

Send flowers to the Warinner family.