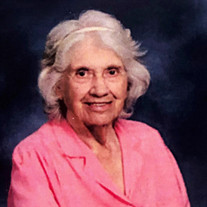 Doris L. Canaday, 97, of New Castle, passed away on the morning of Sunday, July 14, 2019, at Stonebrooke Rehabilitation Center in New Castle. She was born December 30, 1921 in New Castle, Indiana, a daughter of the late Albert and Bertha (Conwell) Riley. Doris grew up in New Castle and graduated from New Castle High School, class of 1939. She married Fred Canaday in 1944 and they later moved to Mt. Summit and Mooreland. Doris retired from Perfect Circle in Hagerstown where she had worked for many years. Following her husband’s death, Doris moved back to New Castle in 1978. She was a long-time member of First Christian Church in New Castle and the Order of Eastern Star in Mooreland and later the New Castle Chapter #116. Those left to cherish Doris’s memory include her children, Fred Thomas (wife: Kharel) Canaday of Franklin, Judy Brickert of Garland, TX, Donald Canaday and Randall (wife: Sheila) Canaday both of New Castle; several grandchildren, great-grandchildren, and nieces and nephews. Doris was preceded in death by her husband, Fred Canaday in 1978; a son, Michael Canaday in 1996, and two brothers, Fannie and Perge. Funeral services will be held at 2:00 pm Wednesday, July 17, 2019 at First Christian Church, 2000 Bundy Ave. New Castle, with Rev. Alecia M. Gross officiating. Following the funeral, we will go in procession to her final resting place in Mt. Summit Cemetery. Friends may call from 12:00 pm until the time of the service Wednesday at the church. A memorial service by the Eastern Star #116 will begin the funeral service. Arrangements have been entrusted to the care of Sproles Family Funeral Home. You may offer the family a personal condolence at www.sprolesfamilycares.com. The Sproles family and staff are honored to serve the family of Doris Canaday.

Doris L. Canaday, 97, of New Castle, passed away on the morning of Sunday, July 14, 2019, at Stonebrooke Rehabilitation Center in New Castle. She was born December 30, 1921 in New Castle, Indiana, a daughter of the late Albert and Bertha (Conwell)... View Obituary & Service Information

The family of Doris L. Canaday created this Life Tributes page to make it easy to share your memories.

Send flowers to the Canaday family.