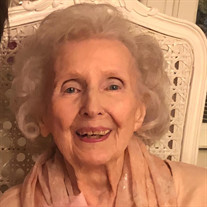 Dorothy Rose (Sullivan) Blair, 99, of Hagerstown, IN, passed away Monday, January 31, 2022, at Arbor Trace Senior Living in Richmond, IN. She was born on October 16, 1922, in Monticello, Arkansas, a daughter of the late John Edward and Artie “Suga” (Duke) Sullivan. Dorothy Rose graduated from Texas Wesleyan College, taught school and, after marrying William Judson Blair on March 15, 1946, received her Master’s Degree in Religious Education from Southwestern Baptist Theological Seminary in Fort Worth, TX. Even though she was approved to enter a doctorate degree program (uncommon in those days), before that ever happened, she and Judson were appointed by the International Mission Board as missionaries to Argentina where they served for 5 years. Then and for the rest of her life, it was always shocking to people to hear such fluent Spanish coming from a little blonde lady! They were then invited to join the missionary staff at the Baptist Spanish Publishing House in El Paso, Texas, where they faithfully ministered for another 35 years until their retirement in 1989. In 1997, they moved to San Angelo, Texas, until Judson’s passing in 2010 at which time she relocated to Hagerstown, IN, where she enjoyed being close to family. She was a beautiful lady…loved by everyone. In addition to her deep passion for flowers, as a multitalented person, she created artistic accomplishments in many areas including floral arrangements, mission hospitality, costuming, and drama productions. Though she will be greatly missed, she has left a legacy of love for God, family, creativity and music that will live on for generations to come. Those left to cherish her memory include her children, Norma “Línda” Lynn (Jim) Morris of Sanger, TX, Martha “Tita” Louise (Ronnie) Kolb of Hagerstown, IN, and William “Bill” Edward (Ivy) Blair of Elizabethton, TN; 16 grandchildren, 46 great-grandchildren and one great-great-grandchild. In addition to her parents, she was preceded in death by her husband, William Judson Blair; a son, Judson Paul Blair and a sister, Marceille Hollingsworth. A celebration of her life will be held on October 16, 2022 which would have been her one hundredth birthday. You may offer the family a personal condolence online at www.sprolesfamilycares.com. The Sproles family and staff are honored to serve the family of Dorothy Blair.

Dorothy Rose (Sullivan) Blair, 99, of Hagerstown, IN, passed away Monday, January 31, 2022, at Arbor Trace Senior Living in Richmond, IN. She was born on October 16, 1922, in Monticello, Arkansas, a daughter of the late John Edward and Artie... View Obituary & Service Information

The family of Dorothy Rose Blair created this Life Tributes page to make it easy to share your memories.

Send flowers to the Blair family.