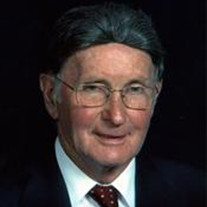 F. Doyle Wright, 82, of Springport, died unexpectedly Friday, May 11, 2012 at St. Vincent Heart Center in Indianapolis. He was born February 14, 1930 in Fentress County, Tennessee, a son of the late Cordell and Lola Wright. Doyle was employed with Marsh Warehouse for 21 years and Durham Manufacturing for 20 years before his retirement. He then worked with his son, Terry at Wright’s Home Improvement. He was a former member of the Teamsters Union Local 135 and a Boy Scout Leader. He was a member of the First Bible Free Will Baptist Church in New Castle for 23 years. He was a collector of memorabilia, enjoyed flea markets, auctions, gardening and traveling, especially to Hawaii. Doyle’s most treasured times were with his family especially his grandchildren and great-grandchildren. He is survived by his wife of 63 years, Pat; a daughter, Joy Hardacre of New Castle; a son, Terry (wife: Lora) Wright of New Castle; grandchildren, Candice (husband: Joseph) Horn of Plainfield, Carrisa (husband: Chad) Anderson of Barcelona, Spain, Amanda (husband: Tim) Dillon of New Castle, Tiffany (husband: Jason) Abbott of Middletown and Zachary Barner of Indianapolis; great-grandchildren, Corinne and Thomas Horn, Emma, Grace and Violet Anderson, Gage and Aubrey Dillon and Jayden Abbott and two sisters, Clara Pritchard and Floye (husband: Paul) Ferrell. In addition to his parents, he was preceded in death by six brothers and sisters and his son-in-law, Roger Hardacre. Funeral services will be held at 11:00 a.m. Wednesday, May 16, 2012 at Sproles Family Funeral Home with Pastor Kevin Flannagin officiating. Burial will follow in Mt. Summit Cemetery. Friends may call from 4 – 8 p.m. Tuesday at Sproles Family Funeral Home. Memorial contributions may be made to the American Heart Association, 3816 Paysphere Circle, Chicago, IL 60674 and The Gideons, P.O. Box 140800, Nashville, TN 37214 envelopes will be available at the funeral home. You may send the family a personal condolence at www.sprolesfamilycares.com. The Sproles family and staff are honored to serve the family of Doyle Wright.

F. Doyle Wright, 82, of Springport, died unexpectedly Friday, May 11, 2012 at St. Vincent Heart Center in Indianapolis. He was born February 14, 1930 in Fentress County, Tennessee, a son of the late Cordell and Lola Wright. Doyle was... View Obituary & Service Information

The family of Doyle Wright created this Life Tributes page to make it easy to share your memories.

Send flowers to the Wright family.