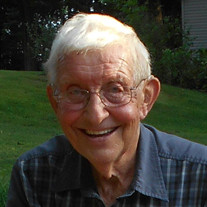 Dr. John W. Austerman, DVM, of Mooreland, Indiana, died on the afternoon of Thursday, September 3, 2015 at IU Health Bloomington Hospital from complications arising from a fall in late April of this year. He was 77 years old. He was born April 21, 1938 in Richmond, Indiana, a son of tenant farmers, Richard and Martha (Greene) Austerman. Dr. Austerman was a graduate of Centerville High School and an alumnus of Kansas State University. Dr. Austerman began his medical career in 1963 as a veterinarian for the U.S. Army in Columbus, Ohio, where he worked with Army animals and inspected meat. Following his honorable discharge from the Army, Dr. Austerman began practicing veterinary medicine in Mooreland in 1965 when he took over the Mooreland Animal Hospital from Dr. Cates. Dr. Austerman was proud to serve the community as “a small town country vet” as he would say. This year marked his 50th anniversary providing veterinary services to the Henry County area. Dr. Austerman was married to Violet Laremore RN, also a graduate of Centerville High School, who was his high school sweetheart. Violet passed away in 1989 after years of battling disease. Dr. Austerman was remarried shortly after Violet's passing to Jo Ellen Fettig. He will forever remain in the hearts of his children, Shari (husband: James) Penticuff, of Bloomington, Brian (wife Cheryl) Austerman, of Beverly, MA, Sheri Bondar Terrell of Greenwood, Debi Moses of Chicago, IL and Nick Bondar of Greenwood; grandchildren, Matthew Penticuff, Daxon Austerman, Garrett Austerman, Lindsey Moses, Kendra Terrell, Drake Terrell, Nick Bondar and Shalise Bondar; a brother, Richard “Dick” Austerman of Tennessee; two sisters, Roseann Nicolls of Rhode Island and Mary Fisher of Richmond and several nieces and nephews. In addition to his wife Violet, Dr. Austerman was preceded in death by his parents. Funeral services will be held at 10:00 a.m. Saturday, September 12, 2015 at Sproles Family Funeral Home with Pastor Byron and Marsha Dealey officiating. Burial will follow in Mooreland Cemetery. The family will receive friends from 4 – 8 p.m. Friday, September 11, 2015 at the funeral home. Memorial contributions may be offered to the New Castle Humane Society, 11 Midway Dr., New Castle, IN 47362. There will also be envelopes available at the funeral home. You may send the family a personal condolence at www.sprolesfamilycares.com. The Sproles family and staff are honored to serve the family of Dr. John Austerman. Family and friends are invited to share food and fellowship at the Mooreland Community Center following the committal service.

Dr. John W. Austerman, DVM, of Mooreland, Indiana, died on the afternoon of Thursday, September 3, 2015 at IU Health Bloomington Hospital from complications arising from a fall in late April of this year. He was 77 years old. He was born April... View Obituary & Service Information

The family of Dr. John W. Austerman, DVM created this Life Tributes page to make it easy to share your memories.