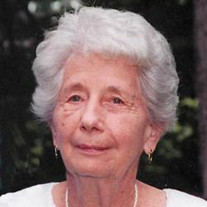 Edith F. New, 91, of Mooreland, went home to be with the Lord, Sunday, July 13, 2014. She was born November 3, 1922 in Henry County, a daughter of the late Alonzo and Gladys (Luellen) Waltz. Edith was a 1940 graduate of Mooreland High School and during World War II was employed as an inspector at Perfect Circle in Hagerstown. She retired after many years of service from Allen’s Young Fashions in downtown New Castle. Edith was a homemaker and enjoyed cooking and she was well known for her fried chicken and pies. She enjoyed traveling and loved spending time with her family, especially her seven grandsons. Even though Edith suffered vision difficulties later in life she still enjoyed baking, shopping and dining out with her family. She was a member of Sigma Phi Gamma Sorority and the Moose Lodge. She and her husband were “Snow Birds” and wintered together in Punta Gorda, Florida for over 20 years. Edith was a member of Trinity United Methodist Church in New Castle and also had attended the North Christian Church in Mooreland. Then after her husband’s passing, she attended the Mt. Summit Christian Church with her daughter and son-in-law. She is survived by her children, Connie (husband: Tom) Thomas of New Castle, David New and Jan (husband: Dennis) Hedrick both of Rutledge, Tennessee; seven grandsons; several great-grandchildren; her special friends, Jay and June French, Juanita Hicks and Carol Blevins of New Castle and a niece, Cindy Cates. In addition to her parents, she was preceded in death by her husband of 65 years, Clarence Homer New; a brother, Bill Waltz and a sister, Jane Snodgress. A special thank you is extended to “A Place Called Home” in Mooreland and their staff for the special loving care given our mother over the past year. Funeral services will be held at 10:00 a.m. Friday, July 18, 2014 at Sproles Family Funeral Home with Rev. Mark O’Brien officiating. Burial will follow in Mooreland Cemetery. Friends may call from 4 – 7 p.m. Thursday at the funeral home. Memorial contributions may be offered to the North Christian Church or Mt. Summit Christian Church. You may send the family a personal condolence at www.sprolesfamilycares.com. The Sproles family and staff are honored to serve the family of Edith New, who was a member of the greatest generation.

The family of Edith F. New created this Life Tributes page to make it easy to share your memories.

Send flowers to the F. family.