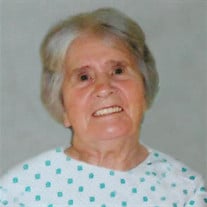 Edna Cowan, 91, of Mt. Summit, went home to be with the Lord on Friday, October 23, 2015 following a lengthy illness. She was born on February 10, 1924 in Byrdstown, Tennessee, a daughter of the late James and Ora Mae (Cargile) Mitchell. Edna was a nurturing person and felt her job in life was to care for those she loved. She married the love of her life, William Jesse Cowan on March 10, 1944 in Kentucky. Edna worked for Brooks Foods in Mt. Summit for many years. She enjoyed being outdoors and working in her flowers. She is survived by a daughter, Kay Canaday of Springport; four sons, Bill (wife: Jane) Cowan of Losantville, James “Bud” (wife: Kathy) Cowan of Mooreland, Ed Cowan (friend: Carolyn Riddle) of Mt. Summit and Dan (wife: Rhonda) Cowan of Muncie; eight grandchildren, Robert (wife: Cindy) Canaday of Hope, Carrie (husband: David) Anderson of New Castle, Todd (wife: Kim) Cowan of Mooreland, Troy (wife: Janet) Cowan of Lusby, Maryland, Marc Cowan of Knightstown, Julie Hoskins of Fishers, Dustin Cowan of Mooreland and Eric Richardson of Knightstown; eight great-grandchildren; four great-great-grandchildren; a sister, Christine Harmon of Cookville, Tennessee; several nieces and nephews and her caregiver, Cathy Shaw and family. In addition to her parents, Edna was preceded in death by her husband of 66 years, William Jesse Cowan in 2010; a daughter-in-law, Sue Cowan in 2009; a son-in-law, Carroll Canaday in 2014 and a brother, Robert Mitchell. Funeral services will be held at 2:00 p.m. Monday, October 26, 2015 at Sproles Family Funeral Home with Elder Brian Ballenger officiating. Burial will follow in Mt. Summit Cemetery. Friends may call from 11:00 a.m. until the time of service Monday at the funeral home. You may send the family a personal condolence at www.sprolesfamilycares.com. Sproles Family Funeral Home is honored to serve the family of Edna Cowan.

Edna Cowan, 91, of Mt. Summit, went home to be with the Lord on Friday, October 23, 2015 following a lengthy illness. She was born on February 10, 1924 in Byrdstown, Tennessee, a daughter of the late James and Ora Mae (Cargile) Mitchell. Edna... View Obituary & Service Information

The family of Edna Cowan created this Life Tributes page to make it easy to share your memories.

Send flowers to the Cowan family.