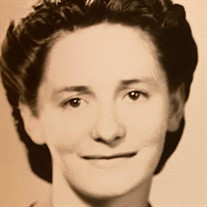 Elva Gessner, 94, of Sunbury, Pennsylvania, passed away peacefully early on the morning of Friday, January 8, 2021, surrounded by her loving family at her son, Don's home in Brownsburg, Indiana. For the past 12 years, Elva and her late husband, John, had lived in Northumberland, PA, until last fall. She was born on March 17, 1926, in Klingerstown, PA, a daughter of the late Charles Willard and Flossie Brosius. At a very young age, following her father’s untimely death, her mother married Daniel Rebuck who raised her. Elva married the love of her life, John Gessner, on November 15, 1947. She was a very gracious lady with a quiet and gentle spirit. Elva was a long-time member of the God’s Missionary Church in Sunbury, PA. Early in life, Elva loved to play baseball and was often among the first picked for teams as she was an excellent hitter and fast runner. Elva had the gift of hospitality and enjoyed hosting people in her home. She invested her time in others, serving as a foster grandparent and spending as much time as possible with her grandchildren, whom she dearly loved. Elva tenderly cared for her husband during his illness for the four years prior to his death in 2013. The greatest aspiration in Elva’s life is found in the lyrics of the song, It’s My Desire - “You may take this world’s wealth and riches, I don’t need earth’s fame. It’s my desire to live for Him.” Those left to cherish Elva’s memory include a son, Don (wife: Shirl) Gessner of Brownsburg, IN; a daughter-in-law, Sharon Gessner of Paxinos, PA; two grandchildren, Abigail Gessner of Paxinos, PA, and Eric (wife: Deborah) Gessner of Indianapolis, IN; four great-grandchildren, Mirabelle, Masselin, Marie Claire, and Maximilian Gessner; a sister, Corrine Welker of Lykens, PA and a brother, Leon Rebuck of Felton, DE. She was preceded in death by her husband of 65 years, John E. Gessner; a son, Ernest Gessner, a sister, Arlene Rothermel, and by a brother, Paul Rebuck. Funeral services will be held at 11:00 am Saturday, January 16, 2021 at God’s Missionary Church, 900 Susquehanna Ave. Sunbury, PA, 17801 with Pastor Keith Bunch officiating. Burial will follow in God’s Missionary Church Cemetery in Pillow, PA. Viewing will be from 10:00 am until the time of service Saturday at the church. Memorial contributions may be mailed to the Sunbury God’s Missionary Church or by Donating Online Here Arrangements have been entrusted to the care of Sproles Family Funeral Home in New Castle, Indiana, and Stephen R. Rothermel Funeral Home in Klingerstown, PA. The Sproles family and staff are honored to serve the family of Elva Gessner.

Elva Gessner, 94, of Sunbury, Pennsylvania, passed away peacefully early on the morning of Friday, January 8, 2021, surrounded by her loving family at her son, Don's home in Brownsburg, Indiana. For the past 12 years, Elva and her late husband,... View Obituary & Service Information

The family of Elva Gessner created this Life Tributes page to make it easy to share your memories.

Send flowers to the Gessner family.