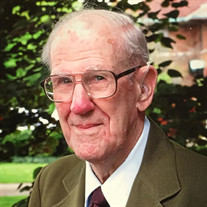 Eugene Lacy, 90, of New Castle, passed away Thursday, November 1, 2018, at IU Health Methodist Hospital in Indianapolis. He was born March 23, 1928 in Muncie, Indiana, a son of the late Henry N. and Nellie Mae (Carmack) Lacy. Gene graduated from Muncie Central High School in 1945 and Ball State Teachers College in 1951. While at Ball State he was a member of the Triangle Club, Theta Chi Fraternity, Pi Omega Pi Business Honorary, and Blue Key National Honor Society. Gene served in the US Army from April 1946 to October 1947. He married Maxine Lou Jackson on June 16, 1950 at St. John’s Universalist Church with Rev. Arthur McDavitt officiating. Gene was employed from 1950-1951 as a bookkeeper for Burr Munson Hudson Car Agency, in the accounting department at the Chevrolet Muncie Factory from 1951-1957 and Perfect Circle/Dana Corporation from 1957-1988 as Plant Controller. He joined the New Castle Rotary Club in August 1959, Hagerstown Rotary Club in 1966 and Richmond Rotary Club in 1985. Gene served as Rotary International District Governor 1989-1990. Gene was passionate about music and directed church choirs at St. Paul Methodist and Gethsemane Methodist Churches in Muncie and First Friends Meeting in New Castle for a total of 35 years. He began directing the Raintree Barbershop Chorus in 1986 for ‘Sing We Noel’ and continued directing the chorus until January 2004. He enjoyed woodworking and helping his wife garden. He was a member of First Friends Meeting and the Keystone Sunday School Class where he served as class president and helped teach. In 1989, he was a charter member and first president of the Chamber of Commerce Ambassadors Club and charter member and second president of the Chamber of Commerce Academy for Community Leadership and was the coordinator for three years. Gene was one of the first volunteers for the Indiana Basketball Hall of Fame. He most enjoyed being a tour guide for elementary students from around the state. He also served on the Hall of Fame Board of Directors and the Hall of Fame Volunteers Advisory Committee. Gene is survived by his wife of 68 years, Maxine Lacy; daughter, Jeanine (husband: Bob) Mathes of New Castle; grandson, Christopher Mathes of New Castle, and several nieces and nephews. He was preceded in death by his parents, a brother, Floyd C. Lacy and a sister, Mary E. Burch. Services were held privately with burial in Tomlinson Cemetery in Muncie. Memorial contributions may be offered to the New Castle Rotary Club, PO Box 1012, New Castle, IN 47362. You may offer the family a personal condolence at www.sprolesfamilycares.com. The Sproles family and staff are honored to serve the family of Eugene Lacy.

The family of Eugene "Gene" Lacy created this Life Tributes page to make it easy to share your memories.

Send flowers to the Lacy family.