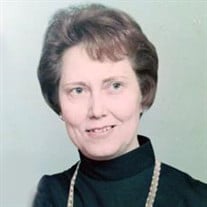 Evelena Guffey, 87, of New Castle, arrived at her Heavenly home on Saturday, April 9, 2016 following an extended illness. She was born March 5, 1929 in Wayne County, Kentucky to William W. and Alice (Garner) Guffey, and graduated from Wayne County High School in 1949. Lena was active in the Cabell Grove United Methodist Church from an early age and served for a time as church secretary. Lena continued to support her hometown church when she moved to Indiana and she worked at Delco Remy in Anderson from 1956 until retiring in 1986. Lena was a talented homemaker who especially loved flowers and gardening. She was also active in local area churches and considered Grace Baptist Church her home in recent years. Lena was always supportive of her family, and she was devoted to her nephew Jack Thurston and his son James. Lena is survived by her sister, Bea Thurston and by several great nieces and nephews, including Sondra Cline, Penny Gauker, Mike Stephens, Vickie McGinnis, Beverly Schetgen, and Pat Stephens. She was preceded in death by her mother Alice, who passed away in 1986; a sister, Iva Daffron; two brothers-in-law, Kenneth Thurston and Case Daffron; a nephew, Jack Thurston; a great nephew Kenny Stephens and a niece, Leita Stephens Wilson. Funeral services will be at 2:00 p.m. Wednesday, April 13, 2016, at Grace Baptist Church in New Castle with the Rev. Denny Neal officiating. Visitation will be at the church from 12:00 to 2:00 p.m. immediately before the service. Burial will follow in South Mound Cemetery. The family wishes to thank those who took excellent care of Lena during her illness, Vicki Latham, Charlotte Chissel, Anita Carroll, and Courtney Crabtree. Arrangements have been entrusted to the care of Sproles Family Funeral Home. You may send the family a personal condolence at www.sprolesfamilycares.com. The Sproles family and staff are honored to serve the family of Evelena Guffey.

Evelena Guffey, 87, of New Castle, arrived at her Heavenly home on Saturday, April 9, 2016 following an extended illness. She was born March 5, 1929 in Wayne County, Kentucky to William W. and Alice (Garner) Guffey, and graduated from Wayne... View Obituary & Service Information

The family of Evelena Guffey created this Life Tributes page to make it easy to share your memories.

Evelena Guffey, 87, of New Castle, arrived at her Heavenly home...

Send flowers to the Guffey family.