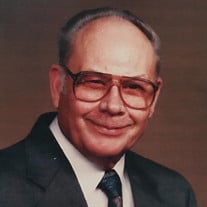 Rev. Frank E. Thompson, 87, of New Castle, went home to be with the Lord on the morning of Sunday, July 21, 2019, at home surrounded by his loving family. He was born March 22, 1932 in Albany, Kentucky, a son of the late Cal and Nancy (Rigney) Thompson. Frank served in the US Army and following his honorable discharge, continued to serve in the US Army Reserves as a Corporal. He married Edith Davis on November 17, 1951. In 1960, Frank earned a bachelor's degree from God's Bible School and College in Cincinnati, Ohio. He then pastored for many years and also served as an evangelist. Frank was a mechanic by trade and owned several service stations in New Castle including the Wake Up on Brown Rd, Sunoco on 14th St. and Thompson and Penticuff at the point of 14th & 18th Streets. He loved playing games with his family and could always be found talking and telling a good joke. Upon Edith’s retirement, they moved to Abingdon, VA where they greatly enjoyed living, fishing and boating on South Holston Lake for 19 years. Frank attended the New Castle First Church of the Nazarene. He and Edith loved to attend Holiness Camp Meetings, especially Hobe Sound Camp in Florida, and Gospel Sings. Frank was also a long-time member of the American Legion. Those left to cherish Frank’s memory include his wife of 67 years, Edith Thompson; one daughter, Deloris “Dee” Sinclair (Stuart) of New Castle; two grandchildren, Don Baney (Terry Goforth) and Laura (James) Baker both of New Castle; one great-granddaughter, Jennifer Baker; several step-grandchildren and great-grandchildren; a sister, Lena Bertram of Shirley; a foster child whom they raised and loved, Clinton Stuart of Meadowview, VA, and several nieces and nephews including a special niece, Becky (Rev. Doug) Elkins. Frank was preceded in death by a daughter, Nancy Lee Thompson, three sisters, Opal (Marrow) Parrigin, Louise (Wendell) Shelley, and an infant, Eva Thompson; three brothers, Bill (Gleah) Thompson, Russell (Artie) Thompson, and Rev. John R. (Anna) Thompson; a brother-in-law, Rev. Hobert Bertram, and several nieces and nephews. Funeral services will be held at 11:00 am Friday, July 26, 2019 at Sproles Family Funeral Home with Pastor Danny Goddard officiating and a eulogy by Beulah Shortridge. Burial will follow in Green Hills Memory Gardens with military honors conducted by contingents from the US Army, the V.F.W. and American Legion. Friends may call from 4 - 8 pm Thursday at the funeral home. Memorial contributions may be offered to the First Church of the Nazarene. You may send the family a personal condolence at www.sprolesfamilycares.com. The Sproles family and staff are honored to serve the family of Rev. Frank E. Thompson.

Rev. Frank E. Thompson, 87, of New Castle, went home to be with the Lord on the morning of Sunday, July 21, 2019, at home surrounded by his loving family. He was born March 22, 1932 in Albany, Kentucky, a son of the late Cal and Nancy (Rigney)... View Obituary & Service Information

The family of Rev. Frank E. Thompson created this Life Tributes page to make it easy to share your memories.

Send flowers to the Thompson family.