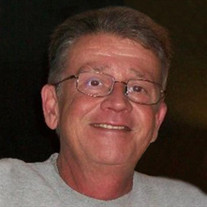 Fred G. Mathews, 62, of New Castle, passed away on the morning of Friday, September 2, 2016 at home. He was born on August 3, 1954 in New Castle, the son of the late William R. “Dick” and Louise (Roberts) Mathews. Fred was a 1972 graduate of New Castle Chrysler High School. For many years Fred drove trucks for IMI and was the accounts manager for Hayes and Company. He also owned Fred Mathews Trucking and other businesses. Fred married the love of his life, Lana, on May 10, 1980 and surprised her on her 60th birthday with a renewal of vows ceremony on the Island of Kauai. He had a large compassionate heart and an unending sense of humor. Fred’s love for his family was paramount and in his downtime he enjoyed fishing and boating. Those left to cherish Fred’s memory include his wife of 36 years, Lana (Knotts) Mathews; a daughter, Erica Mathews of New Castle, two sons, O.B. (wife: Kristy) Caudle of Byrdstown, TN and Chad Caudle of Phoenix, AZ; six grandchildren, Dylan, Evan, Brett, Drew, Dane and Brynn Caudle; a sister, Pam (husband: Sam) Hess of Carmel; a brother-in-law, Brad (wife: Lisa) Knotts of New Castle; a sister-in-law, Kim (Knotts) Miller of New Castle; nieces and nephews, Kristin Hess of Fishers, Katie Helm of Fishers, Megan Willis of Muncie, Doug Huckeby of New Castle and Lacey Thompson of Spiceland and also several cousins. Fred was preceded in death by his parents and a nephew, Kyle Patton. A service to celebrate Fred’s life will be held at 7:00 p.m. Wednesday, September 7, 2016 at Sproles Family Funeral Home with David Brock officiating. The family will receive friends from 3 - 7 p.m. on Wednesday at the funeral home. The family requests memorial contributions be made to the American Cancer Society or St. Jude’s Children’s Hospital. Envelopes will be available at the funeral home. You may send the family a personal condolence at www.sprolesfamilycares.com. The Sproles family and staff are honored to serve the family of Fred Mathews.

The family of Fred G. Mathews created this Life Tributes page to make it easy to share your memories.

Send flowers to the Mathews family.