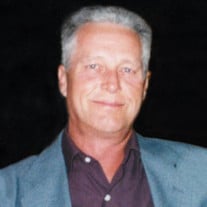 Gary Walker, 68, of Straughn, passed away Friday, March 20, 2015 at St. Vincent Hospital in Indianapolis. He was born October 27, 1946 in New Castle, the son of the late Robert and Patricia (Kennedy) Walker. Gary was a 1966 graduate of New Castle Chrysler High School. He served in the U.S. Army during the Vietnam War from 1966 to 1969 as a member of the Military Police where he earned the Vietnam Service Medal with Three Bronze Stars. He also graduated from Ocala Community College where he studied Heating, Ventilation and Air Conditioning. He retired in 2001 from Chrysler Corporation following 30 years of employment. Gary loved golfing, fishing, camping, listening to music, being with his family and having fun with friends. He was a member of the Moose and Eagles Lodges, the American Legion and VFW. Gary touched the lives of many people with his smile and generosity and maintained his trademark sense of humor all the way to the end. Gary was the beloved husband of over 34 years to Theresa (Smith) Walker who survives. His memory will forever be cherished by his loving children, Todd (wife: Katie) Walker, Kim (husband: Doug) Ebert and Travis Walker all of Florida; four treasured grandchildren, Seth and Abbie Walker and Ashlyn and Madison Ebert; devoted sisters, Deborah Ann (Walker) Carrico (husband: Gary) and Paula Sue (Walker) Orr both of Ocklawaha, Florida; his in-laws, Gerald “Bud” (wife: Pauline) Smith of New Castle and Barbara (husband: Jim) Ashley of New Castle; brothers-in-law, Bob (wife: Joy Ann) Smith of Plainfield and Doug (wife: Myra) Smith of Brazil; aunts, Janet (husband: Charles) Leeka of Wabash and Carolyn McCullum of New Castle; and several cousins, nieces and nephews including, Chris Davis, Jason Sotherden, Bria (husband: Paul) Slover, Lyle Smith and Emily Smith. In addition to his parents, he was preceded in death by his beloved son, Jeffrey Edward Walker in 1996; a sister, Karen Sue Walker; grandparents, Leslie and Anna Walker and Roger and Thelma Kennedy; an aunt, Marilyn Jagger and an uncle, Jim Walker. Funeral services will be held at 11:00 a.m. Wednesday, March 25, 2015 at Sproles Family Funeral Home with Chaplain Fran Bullock officiating. Military honors provided by contingents from the U.S. Army, the American Legion and VFW. Burial will follow in South Mound Cemetery West Lawn Addition. Friends may call from 4 – 8 p.m. Tuesday at the funeral home. Memorial contributions may be made to the Wounded Warrior Project, with envelopes available at the funeral home or at www.woundedwarriorproject.org. You may send the family a personal condolence at www.sprolesfamilycares.com. The Sproles family and staff are honored to serve the family of Gary Walker.

Gary Walker, 68, of Straughn, passed away Friday, March 20, 2015 at St. Vincent Hospital in Indianapolis. He was born October 27, 1946 in New Castle, the son of the late Robert and Patricia (Kennedy) Walker. Gary was a 1966 graduate of New... View Obituary & Service Information

The family of Gary Walker created this Life Tributes page to make it easy to share your memories.

Send flowers to the Walker family.