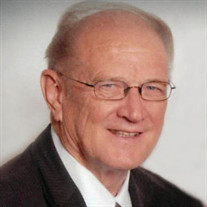 Dr. Gene Hood, 77, of Indianapolis, went home to be with the Lord early Friday morning at Hancock Regional Hospital in Greenfield. He was born on August 23, 1937 in Pecos, TX, a son of the late Albert Daniel and Ruby Estelle (George) Hood. Dr. Hood was a graduate of Bethany Nazarene College, now Southern Nazarene University, where he earned his bachelor’s and master’s degrees. He later earned a Doctorate of Divinity from Indiana Christian University. While at Bethany, he met his “special angel” Carolyn Uphaus. They were married September 2, 1958 and were close partners in ministry for over 56 years. He began his pastoral ministry in Tulsa, OK and then served as an evangelist for seven years. For over 42 years, Dr. Hood was pastor of Independent Nazarene Church in Beech Grove and in 2014 founded the Independent Nazarene Church in New Palestine. Dr. Hood had a heart for young people and was passionate about Christian education. In 1975, he established the Nazarene Christian School, building a new school facility behind the church. He co-founded Paradigm Accelerated Curriculum, a biblically based curriculum used across the United States and in countries around the world. Dr. Hood strongly supported missions. He did extensive missionary work and built many churches and schools in Honduras, Guatemala, Mexico, Belize, Costa Rica, Jamaica, Haiti, Nigeria, South Africa, Ukraine, Korea and in the Western United States among Native Americans. He was instrumental in placing Bibles in every school in Honduras and shipped over one million Bibles to Russia. Just days before his death, Dr. Hood’s final act of spreading the gospel was donating a first edition, first issue of the 1611 King James Bible to the government of Papua New Guinea. Dr. Hood’s concern for the medical needs of individuals in the countries he visited led him to establish medical clinics in Honduras and for several years he owned and operated an emergency air ambulance service throughout Central America evacuating people with urgent needs to Houston and Miami Hospitals. He owned and operated radio stations, radio towers and radio programs in several states and in the countries of Belize, Honduras, and Papua New Guinea. For over 20 years, he hosted the Gospel Music Southern Style Radio Program in downtown Indianapolis. He also owned and operated a Christian Sharing Program for ministers and in the 70’s and 80’s several nursing homes which he considered a ministry to the elderly. Dr. Hood was a staunch advocate of religious liberty and freedom for Christian schools and was very active politically in order to safeguard the continuation of those freedoms. Those left to cherish his memory are his loving wife, Carolyn Hood; children, Randy (wife: Barbara) Hood of New Palestine, Paula (husband: Tommie) Phillips of Indianapolis, Jonathan (wife: Jessica) Hood of Fargo, ND and Joel (wife: Mandy) Hood of Cincinnati, Ohio; eight grandchildren, Adrian (wife: Brittany) Hood, Ashton Hood, Kaylee Phillips, Angel Hood, Brooklynn Phillips, Zoe Hood, Emma Hood and Madeline Hood; two great-grandchildren, Mackenzie and Juliette Hood; a brother, Darwin (wife: Rose) Hood of Pasadena, CA and a sister, Colleen (husband: Chuck) Chiles of El Cajon, CA and several nieces and nephews. He was preceded in death by two brothers, Danny and Carl Hood and a sister, Alleen Hood. Funeral arrangements have been entrusted to the care of Sproles Family Funeral Home in New Castle. You may send the family a personal condolence at www.sprolesfamilycares.com. Funeral services will be held at 1:00 p.m. Friday, May 1, 2015 at the Life Center at Southport - Indianapolis Baptist Temple, 4002 E. Southport Road, Indianapolis, with Rev. Wallace Thornton, Rev. Rollin Mitchell and Rev. Ben Crawford officiating. Entombment will follow in Washington Park East Cemetery. The family will receive friends from 4 – 8 p.m. Thursday, April 30, 2015 at Flanner and Buchanan Funeral Center, Washington Park East and from 11:00 am. until the time of the service Friday at the church. The Sproles Family and staff are honored to serve the family of Dr. Gene Hood. ***Please Note: The funeral will be available by webcast starting at 12:45 p.m., Friday, May 1, 2015. Here is the link to view the service: http://livestream.com/holinessonline/hood. Also, ministers attending the funeral service of Dr. Gene Hood are requested to bring their King James Bibles to help form an honor guard after the service. Further instructions will be provided at the service.***

Dr. Gene Hood, 77, of Indianapolis, went home to be with the Lord early Friday morning at Hancock Regional Hospital in Greenfield. He was born on August 23, 1937 in Pecos, TX, a son of the late Albert Daniel and Ruby Estelle (George) Hood.... View Obituary & Service Information

The family of Dr. Gene Hood created this Life Tributes page to make it easy to share your memories.

Send flowers to the Hood family.