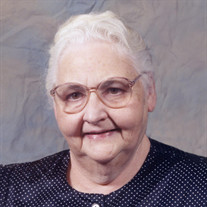 Geneva Irene (Lammott) Petty, 87, of New Castle, went home to be with the Lord early on the morning of Tuesday, August 14, 2018, at Stonebrooke Rehabilitation Center in New Castle. She was born January 17, 1931 in Lynn, Indiana, a daughter of the late Oscar H. and Clara Elizabeth (Rusk) Lammott. Geneva was a 1949 graduate of Richmond High School. She married the love of her life, Eugene Petty, on January 21, 1950. Geneva was a hard worker, growing up on a farm in Sulphur Springs and then moved with her family to Richmond. While in high school she was a “Candy Striper” at Reid Hospital working in OB with babies. She was a cook at the Yellow Cab Restaurant, for many years she and her husband owned Petty’s House of Coats and Furs (formerly Brandenburg Furs) on Broad Street. She also sold Tupperware and baked and decorated cakes. Geneva had attended the New Castle Pilgrim Holiness Church and the Muncie Bible Holiness Church. Geneva enjoyed music, playing the piano and singing with her husband in church. Her family was her life and enjoyment. Those left to cherish Geneva’s memory include her husband of 68 years, Eugene “Gene” Petty; her children, Stanley Eugene (Shirley) Petty of New Castle, Elizabeth Ann Miller of Mt. Sterling, KY, Teresa Lyn Petty of Ft. Wayne, Robert Allen (Yvonne) Petty of Cumberland, Stephen Mark (Tabatha) Petty of Mooresville, David Timothy (Connie) Petty of Anderson and John Edward (Traci) Petty of Muncie; 28 grandchildren and 43 great-grandchildren. In addition to her parents, she was preceded in death by four brothers, Orville, Lloyd, Virgil and Vernon Lammott and a sister, Thelma Lamb. Funeral services will be held at 11:00 am Tuesday, August 21, 2018 at Sproles Family Funeral Home with Rev. Thomas L. Sproles officiating. Burial will follow in Elkhorn Cemetery between Richmond and Liberty, Indiana. Friends may call from 9 am until the time of service Tuesday at the funeral home. You may send the family a personal condolence at www.sprolesfamilycares.com. The Sproles family and staff are honored to serve the family of Geneva Petty.

Geneva Irene (Lammott) Petty, 87, of New Castle, went home to be with the Lord early on the morning of Tuesday, August 14, 2018, at Stonebrooke Rehabilitation Center in New Castle. She was born January 17, 1931 in Lynn, Indiana, a daughter... View Obituary & Service Information

The family of Geneva Irene Petty created this Life Tributes page to make it easy to share your memories.

Send flowers to the Petty family.