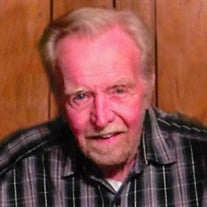 George E. Stroup, 79, of Dunreith, passed away on the morning of Thursday, April 6, 2017 at Hancock Regional Hospital in Greenfield. He was born on September 2, 1937 in Dunreith, Indiana, a son of the late Herbert Joseph Stroup and Alvaretta “Alvie” Stroup Loy. George was a 1955 graduate of Spiceland High School. He entered the U.S. Air Force and served admirably in Vietnam and continued his career in the military as a Special Investigator and Counterintelligence Superintendent. George retired from the Air Force as a Master Sargent in 1978 after serving 23 years. He then worked as a Civil Servant in AAFES - Army and Air Force Exchange Service - in Germany before retiring in 1990. George was an avid outdoorsman who loved hunting all over the world. He enjoyed camping, riding motorcycles and his dogs, especially Rocky, his Jack Russell. George loved to read and travel. He lived in several countries and loved the diverse cultures. He is survived by a daughter, Audrey (husband: Steve) Hardman of Cleveland, MS; a son, Corey Stroup of Dunreith; a son-in-law, Dan Young of Fayetteville, GA; grandchildren, Shane (wife: Patti) Hardman of Rainbow City, AL, Blake (wife: Jessica) Hardman of Macon, GA, Ryan Hardman of Fayetteville, GA, Tyler Hardman of Atlanta, GA, Kelsey Hardman of Cleveland, MS, Shelly (husband: Dan) Bourbeau of Chicago, IL, Amy (husband: Tim) Tedder of Ocala, FL, and Steve (wife: Tatum) Young of Uvita, Costa Rica and great-grandchildren, Shelby, Bree, Carley, Noah, Aiden, Landon, Caleb, Sienna and Foster. In addition to his parents, he was preceded in death by the father who raised him, John Loy; a daughter, Rebecca “Becky” Young and a brother, Charles Stroup. Graveside services will be held at 11:00 am Saturday, April 8, 2017 at South Mound Cemetery. Memorial contributions may be offered to the Wounded Warrior Project, http://www.woundedwarriorproject.org/donate. You may send the family a personal condolence at www.sprolesfamilycares.com. Arrangements have been entrusted to the care of Sproles Family Funeral Home. The Sproles family and staff are honored to serve the family of George E. Stroup.

George E. Stroup, 79, of Dunreith, passed away on the morning of Thursday, April 6, 2017 at Hancock Regional Hospital in Greenfield. He was born on September 2, 1937 in Dunreith, Indiana, a son of the late Herbert Joseph Stroup and Alvaretta... View Obituary & Service Information

The family of George E. Stroup created this Life Tributes page to make it easy to share your memories.

George E. Stroup, 79, of Dunreith, passed away on the morning...

Send flowers to the Stroup family.