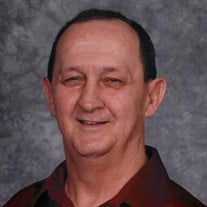 Gerald Dewayne “Buck” Gard, 72 of Mooreland, went to be with his family in heaven on February 26, 2019 following a long illness. He was surrounded by his loving family. Buck was born on September 10, 1946 in Mooreland, Indiana, a son of the late Kenneth Edgar “Shorty” and Frances Cathlene (Murray) Gard. Buck graduated from Mooreland High School in 1964. He worked at Chrysler Corporation for 34 years retiring in 2000. He umpired New Castle Babe Ruth and Blue River Little League Baseball and was a Mooreland Volunteer Firefighter for over 25 years. Buck was also a licensed auctioneer for over 30 years in three states. He and his wife, Betty, owned the Blue Moon Restaurant in Losantville for 10 years. Buck was in the Red Hot Rhythm Band until his stroke in 2010. Buck is survived by his wife, Betty - They have been together for the past 34 years; three sons, Brian (Kim) Gard of Mooreland, Brett (Megan) Gard of New Castle, and Junior (Martha) Gard of Mooreland; four daughters, Kelly Curtis and Kim (Joe) Liles both of Mooreland, Sally (Gary) Sewell of Muncie, and Petrina (Tim) Cross of Anderson; 18 grandchildren; 10 great-grandchildren; a sister-in-law, Jacque Gard of Mooreland; a brother-in-law, Cecil Cooper of New Castle and several nieces and nephews. In addition to his parents, Buck was preceded in death by his former wife, Karen (Perry) Gard; three brothers, Gary (wife: Darlene) Gard, Kenneth Eugene “Gene” Gard, and George P. “Muscles” Gard, Sr.; a sister; Carolyn Sue Cooper and a grandson, Joseph Sewell. Funeral services will be held at 11:00 am Saturday, March 2, 2019 at Sproles Family Funeral Home with Pastor Matt Daffron officiating. Burial will follow in Mooreland Cemetery. Friends may call from 4 - 8 pm on Friday at the funeral home. You may offer the family a personal condolence at www.sprolesfamilycares.com. The Sproles family and staff are honored to serve the family of Gerald “Buck” Gard.

The family of Gerald "Buck" Gard created this Life Tributes page to make it easy to share your memories.

Send flowers to the Gard family.