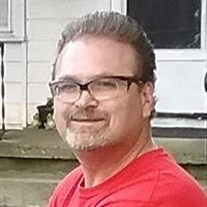 Gerald Edward Hammond Jr., 55, a life-long resident of New Castle, parked his bike at Heaven’s Gate early on Sunday morning, April 26, 2020, following injuries sustained in an accident last Wednesday evening. He was born on November 16, 1964, in New Castle, Indiana, a son of Gerald Edward Hammond Sr. and Brenda (Engle) Hammond. After graduating from New Castle Chrysler High School, Junior proudly served his country in the US Army. Junior lived life with passion and energy! He was a compassionate, positive, kind, and encouraging light to those whose paths crossed his. Junior’s great love for the game of baseball was evident in the many years he coached the Little League Giants. Junior’s love of the game, however, came in second to the care he had for the boys he coached. He was a master motivator, knowing how to bring out the best in each player. He deftly balanced encouragement with discipline and hard work. He seemed to know when to provide a swift “kick in the pants” when a player was not putting in the effort but also knew when to pat him on the back and lavish praise. When the team won, as Junior’s teams often did, you could hear him hoopin’ and hollerin’ for several blocks as he celebrated with the team. When they lost, he would take responsibility for the loss often telling the boys “You guys did a great job! I should have done a better job coaching.” He never forgot a player he coached, and as they grew older and moved on he would often show up at their games or inquire about them when he would see their parents in town. Junior coached several All-Star Teams and was a coach for the 12-year old’s All-Star Team that reached the Little League World Series in 2012. He also coached 5th and 6th-grade football for New Castle. He enjoyed riding motorcycles and had many over the years. In the last few years, his greatest joy was his two grandsons and he would often stop by after work at Magna Powertrain in Muncie to spend time with them. Junior attended Life Source Church in New Castle and Tabernacle of Praise in Muncie. A few years ago, following a startling dream where Jesus appeared and told Junior that he was going to die if he didn’t change his ways, he totally committed his life to Christ. That same passion that had formerly caused anger and arguing turned into love and compassion for others. You couldn’t be around Junior long before he would be sharing his testimony, often saying “If God can save me, He can save anybody” and “If I died today, I would be ready to go!” Junior is survived by his three sons, Tyler Hammond of New Castle, Blaine Hammond (fiancé: Courntneay Dellavalle-jones) of Mt. Summit, and Gerald Edward Hammond Jr. “Trey” of New Castle; two grandsons, Carter and Chandler Hammond; his mother, Brenda Hammond of New Castle; a brother, Chris (wife: Lana) Hammond of New Castle, and several nieces and nephews. In addition to his father, Gerald Edward Hammond Sr., Junior was preceded in death by a brother, Timothy Hammond, and a sister, Robin Criswell. Under current Covid 19 restrictions that may or may not change on Friday. The current service arrangements are as follows: Funeral services for immediate family only will be held at 1:00 pm Saturday, May 2, 2020, at Sproles Family Funeral Home with Pastor Paul Lawson officiating. You may view Junior's funeral service live here Funeral Livestream Burial will follow in South Mound Cemetery West Lawn Addition with the procession passing the Little League Diamonds. There will be a public drive through visitation from 5 - 7 pm Friday on the South Side of Sproles Family Funeral Home. Please enter from Memorial Drive, pull up to the covered portico, pause and pay your respects from inside your vehicle, and exit the back to Trojan Lane. Funeral Home staff will provide guidance. Memorial contributions may be offered to assist the family with expenses. You may donate directly to the funeral home Donate Here or at Go Fund Me The Sproles family and staff are honored to serve the family of Junior Hammond.

The family of Gerald Edward Hammond Jr. created this Life Tributes page to make it easy to share your memories.

Send flowers to the Hammond family.