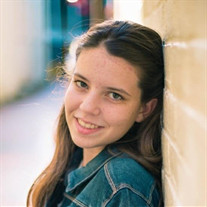 Our beautiful daughter, Grace Anne Parks, age 20, of Indianapolis, was transported by angels into the waiting arms of her Heavenly Father on the afternoon of Sunday, December 9, 2018 following injuries sustained in an automobile accident. She was born on February 7, 1998 in Indianapolis, a daughter of Don and Ann (Freeman) Parks. Grace had a bubbly personality and always had a smile for others. She was a giver and would go out of her way to help others. She loved children and had the gift of being gentle, especially with children with special needs. Grace worked at the Ransburg YMCA since August 2015 as a swim lesson instructor for children and had worked her way up to an on-deck supervisor for swim lessons. She was one of the Y’s most dependable lifeguards and served on the Staff Satisfaction Committee. Grace was continually looking for ways to care for others. Grace’s passion was playing the violin that was passed down from her great-grandfather. She loved Theatre, and seeing a Broadway Show in New York was on her bucket list. Grace attended Beech Grove Independent Nazarene Church where she assisted in the Junior Church, played violin in the orchestra, and participated in special plays and programs. Grace played volleyball in high school and played, coached, and refereed indoor Soccer. Those left to cherish Grace’s memory include her loving parents, Don and Ann Parks of Indianapolis; her cherished siblings, Luke, Paige, and Stone Parks, all at home; her paternal grandmother, Shirley Parks of Indianapolis; her maternal grandparents, Dan and Roberta Freeman of Indianapolis and her aunts, Wendy Bates of Indianapolis and Denise (Rob) Best of Fishers. Grace was preceded in death by her paternal grandfather, Donald J. Parks. Funeral services will be held at 11:00 am Monday, December 17, 2018 at the Beech Grove Independent Nazarene Church, 5152 Hornet Ave., with Pastor Richard Gremillion and Don Bates Jr. officiating. Burial will follow in Washington Park East Cemetery. Friends may call from 4 - 8 pm Sunday, December 16, 2018 at the church and one hour prior to the funeral on Monday. Arrangements have been entrusted to the care of Sproles Family Funeral Home in New Castle. The family would prefer memorial contributions be offered to the Ransburg YMCA, https://indymca.org/donate. You may send the family a personal condolence at www.sprolesfamilycares.com. The Sproles family and staff are honored to serve the family of Grace Parks.

Our beautiful daughter, Grace Anne Parks, age 20, of Indianapolis, was transported by angels into the waiting arms of her Heavenly Father on the afternoon of Sunday, December 9, 2018 following injuries sustained in an automobile accident. She... View Obituary & Service Information

The family of Grace Anne Parks created this Life Tributes page to make it easy to share your memories.

Send flowers to the Parks family.