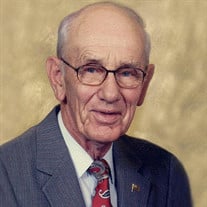 H. Lester Wendell D.C., 94, of New Castle passed away peacefully on the morning of Friday, January 29, 2021 at Henry Community Health. He was born on September 18, 1926 in Flint, Michigan, a son of the late Harry and Adelaide (Crowter) Wendell. Les was an Army veteran of WWII and served in the South Pacific. Being hurt as a teenager he relocated to Indianapolis to pursue a childhood dream of becoming a Chiropractor. In May of 1950, Les graduated from Lincoln Chiropractic College in Indianapolis and married his beloved wife, Jane C. Roberts. They relocated to Forestville, a small town in western New York, to set up a private practice. Les became known as “Doc” was very active in the community belonging to the Lions Club and serving as Sight Conservation Chairman. He was also in the Businessmen Association where they wrapped candy for children at Christmas, the Chautauqua County Chapter of Barbershoppers and Assistant Cub Master of the Boy Scouts of America. Les was a volunteer fireman and helped set up an emergency squad. He belonged to the United Methodist Church and for many years was head of the Sunday school program. He was proud to be a Mason and belonged for over 50 years to the Hanover Lodge #152 where he was a past Master. He enjoyed watching sports and playing golf. He was a member of the Tri County Country Club and for many years played golf in the Wednesday Night league. In 1991 Les retired after 40 years of Chiropractic practice. He and Jane moved to New Castle to be near family. He joined the New Castle Masonic Lodge No. 91 F&AM. His Masonic Brothers were an important part of his life and he enjoyed travelling to other lodges. Les was also a member of the First Presbyterian Church and sang in the choir. During retirement Les continued playing golf one or two times per week, working in is yard, woodworking, playing with his cocker spaniel dog and reading. He loved his children, grandchildren and great-grandchildren and will always be remembered for having “job-jobs” to do as well as ice cream cones and going for a ride or walk. Those left to cherish his memory include his son, Steven (wife: Sallie) Wendell and daughter, Pamela (husband: James) Powell; 9 grandchildren and 18 great-grandchildren. In addition to his parents, he was preceded in death by his wife of 58 years, Jane C. Wendell; brothers, Lawrence Wendell and Louis Wendell and a great-grandson, Matthew Lye. Funeral services will be held at 11:00 am, Wednesday, February 3, 2021 at Sproles Family Funeral Home. A Masonic Memorial will begin at 11:00 am followed by the funeral service with Pastor Rod Smith officiating. Burial will follow at South Mound Cemetery West Lawn Addition. Friends may call from 10 – 11 am prior to the service at the funeral home. You may send a personal condolence online at www.sprolesfamilycares.com. The Sproles Family and staff are honored to serve the family of Lester Wendell.

H. Lester Wendell D.C., 94, of New Castle passed away peacefully on the morning of Friday, January 29, 2021 at Henry Community Health. He was born on September 18, 1926 in Flint, Michigan, a son of the late Harry and Adelaide (Crowter) Wendell.... View Obituary & Service Information

The family of H. Lester Wendell created this Life Tributes page to make it easy to share your memories.

Send flowers to the Wendell family.